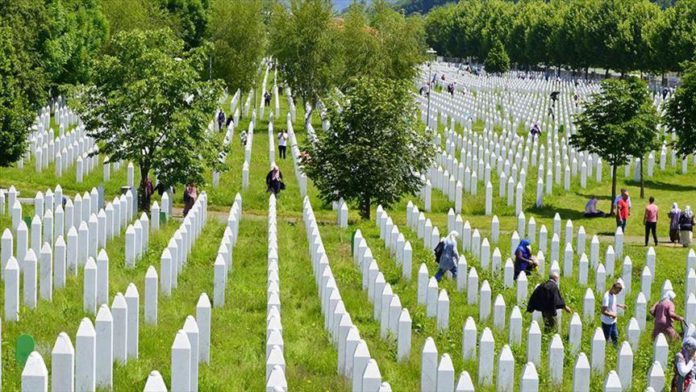 *The writer is the Director of the Srebrenica Memorial Center. A part-time lecturer at the International Relations Department of the International University of Sarajevo (IUS), Dr. Suljagic is also the author of two books: “Ethnic Cleansing: Politics, Policy, Violence – Serb Ethnic Cleansing Campaign in former Yugoslavia” and “Postcards from the Grave”.

After years of sleeping on a mattress on the floor, I decided to have my house thoroughly renovated. A neighbor readily offered me his help as well as a place to stay for the duration of the construction. His house is in a different part of the village, on the bank of the local river. This is the part of the village that was first settled by our ancestors in the late 1880’s, the result of yet another concession of the retreating Ottoman Empire. I never gave much thought to this until the war broke out. The toughest people I knew throughout what most of us imprecisely call “the war” came from that part of the village.

At one point during the siege of Srebrenica, I had an unfortunate encounter with some petty criminals in the enclave. Because of my “privileged” position as an interpreter, I could go to the semblance of authority that existed in the enclave and complain. It was handled, and as a result I was henceforth left alone. A few weeks later, I was visited by a group of my pre-war neighbors, all of whom were a few years older than I was. They accosted me at the town’s Post Office where I worked for one of the UN agencies, and told me in no uncertain terms that they felt betrayed by the fact that I had chosen to go to outsiders for help. They told me that I was under their protection, and that if anything similar were to happen in the future I was to tell them first. I have never been so moved in my life, before or after.

As the 25th anniversary of the fall of Srebrenica and the culmination of the Bosnian genocide approaches, I think more and more about all the lives lost in the enclave before July 1995.

During the first year of the war, the siege of Srebrenica was uniquely characterized by large groups of civilians crossing the confrontation line at night, returning to their villages in search of food. The Serbs often ambushed them, killing and maiming many. No one counted the dead. Some were captured and treated barbarically. Many of my friends, neighbors, and relatives –including my father– went on those overnight “excursions” into what had become enemy territory. I remember my father clutching a small, black hand grenade, the only weapon that he could find, which he took with him in case he was captured.

The events of July 1995 did not take place in a historical, social, political or military vacuum. To borrow a phrase from Raphael Lemkin, we were attacked on all fronts of our existence. Around a dozen elderly men and women, who were unable to leave the village on account of their advanced age, were burnt alive in a house where they stayed together, seeking safety and comfort in numbers. Our villages were thoroughly pillaged and often razed to the ground. We were stripped of our livelihoods, our worldly possessions, and any source of stability or hope for the future. Choosing to live meant trying to survive “in the woods”. The uncertainty which characterized our daily lives was complete. People went from village to village seeking safety and shelter, only to relive the same experiences of terror, destruction and loss. Rural eastern Bosnia was raped and pillaged for three and a half years before the genocidal operation in Srebrenica was even underway.

The antiseptic nature of the judicial process which established the facts of the genocide in July 1995 belies the full extent of the carnage unleashed on the rural population of eastern Bosnia. This violence was not a function of chaos or “ancient hatreds”; it was the carefully choreographed result of a political decision made by the Bosnian Serb leadership. In May 1992, the secessionist “assembly”, which had been established the previous October by Radovan Karadzic, adopted as one of its “strategic goals” the elimination of the Drina River as a border between Bosnia and Serbia – “a border between two worlds”, as some in the Bosnian Serb leadership put it. This directive could only be implemented through the elimination of Bosniaks from that part of the country where they formed a demographic majority, whom the Bosnian Serb leadership viewed as alien and inherently hostile population. In support of this end, Serbia’s secret services and the Yugoslav National Army (JNA) continuously supplied the local Serb population with armaments and supported them in various ways throughout their attack on eastern Bosnia.

People were murdered by the hundreds on a weekly basis. Some were detained in camps that although temporary, were built for the specific purposes of torture and murder. Women were raped, often kept in private houses in deserted Bosniak or mixed villages and raped until pregnant. Others, after being terrorized and pauperized, were brutally deported. That is the context in which the genocide in Srebrenica took place. Those are the horrors which were visited upon us, and which we resisted against all odds until the moment of our execution. That is the evil which, after a grueling three-and-a-half year struggle, finally caught up with us in July 1995.

The commemoration of the 25th anniversary of the Srebrenica genocide is going to be radically different from previous years. As we organize this year’s event, we are faced with a number of unprecedented challenges. These include not only the recent pandemic which has ground many of the world’s ordinary operations to a halt, but also an openly hostile environment where genocide denial is pervasive. Yet our message this year is clear: we mourn the fall of Srebrenica and the lives which were tragically lost in July 1995, and recognize that Srebrenica was only the center of gravity of the Bosnian genocide. Those of us who survived this attack on our physical, cultural, and spiritual existence will not allow anyone else to define that experience for us.

As the renovation works are slowly coming to an end, I feel unusually excited about moving back in my own house. I moved out of the house that stood in its place in May 1992 and which was razed to the ground a few months later. I moved back in a year after my grandfather died in it, having returned in 2001.

It is strange that I should feel hopeful and perhaps peaceful in the place that signifies so much of my personal trauma. I believe it is because I know what was on the horizon back in the 1990’s. We were meant to disappear.