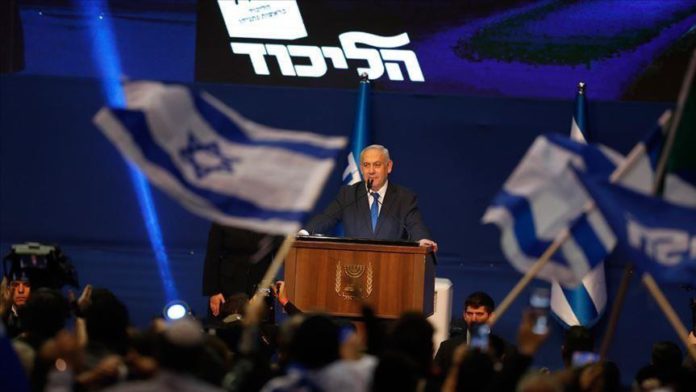 Israeli Prime Minister Benjamin Netanyahu is preparing to run in the general elections set for March 23, the country’s fourth round of polls in two years, amid a political stalemate among the main parties in Israel.

Heading the right-wing Likud Party, Netanyahu is the longest-serving prime minister in Israel’s history with more than 14 years in office.

According to Israli experts, he wants to preserve his post in order to strengthen his position amid ongoing trial on corruption charges.

On Feb. 8, Netanyahu appeared in the Jerusalem District Court for the resumption of his trial on corruption charges. Netanyahu has repeatedly denied the accusations.

The coronavirus vaccination campaign has been a main theme in Netanyahu’s electoral campaign in an effort by the Israeli premier to preserve his seat in the upcoming elections.

Seeking to regain voter support in the upcoming polls, Netanyahu has given a strong message in his election campaign that Israel is “successful” in its fight against the COVID-19 pandemic.

To date, Israel has administered the most COVID-19 vaccine doses per capita in the world.

More than half of the population have received the first dose of the coronavirus vaccine since the vaccination campaign began on Dec. 20.

Some 40% of the country’s population have already received the second dose.

Most of the COVID-19 restrictions were removed in the country thanks to the rapid progress in vaccination.

A public opinion poll aired by Channel 12 predicted that Likud would emerge the largest party if elections were held today, picking up 28 seats. That tally was down from the 36 seats the party has in the current parliament.

Yesh Atid Party under the leadership of opposition leader Yair Lapid was predicted to be the second biggest party with 19 seats, according to the poll.

Along with Likud’s allies, Netanyahu’s right-wing bloc would have 59 seats, short of the 61 needed to form a ruling majority, according to the poll.

The survey signaled that a new political deadlock awaits Israel after the election.

Turkey's Borsa Istanbul up 1.42% at close