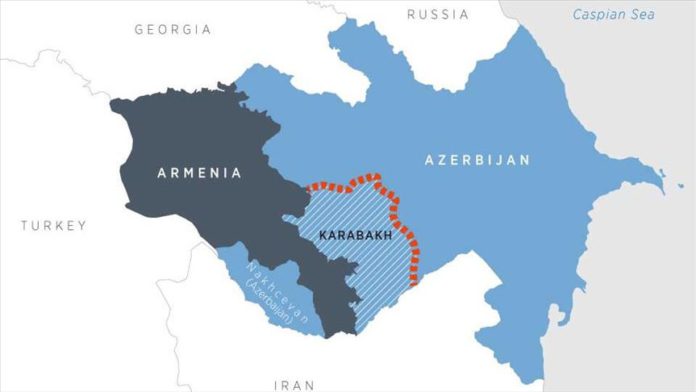 Several days into what appears to be a successful offensive of the armed forces of Azerbaijan in the region of Nagorno-Karabakh, Prime Minister of Armenia Nikol Pashinyan gave an interview to Bild, a leading German media outlet. In what at times looked more like a rant, Mr. Pashinyan revisited a number of “historical” claims, concluding that “Nagorno-Karabakh and Armenia are currently on a civilization front. And if the international community does not react appropriately to this fact, Turkey should be expected near Vienna.”

This statement seemed like an all too familiar echo of the rhetoric used during the 1990s wars of dissolution in former Yugoslavia. Radovan Karadzic, the Bosnian Serb leader who is presently serving life in prison for genocide and crimes against humanity, believed that the end goal of Bosnian independence was to “establish a ‘Green Transversal’ through Sandzak, Kosovo and the Albanian part of Macedonia, and thus become a stronghold of Islamic, primarily Turkish, interests in Europe.”

Other Serb politicians from the period are on the record as saying that “in the dark realm of Islam, in the sheepfolds (…) there is no (…) place” for civilized peoples, arguing that Europe was ungrateful for the Serbs’ struggle “as the last bulwark against the penetration of Islam into Europe.” [4]

Both then and now, the rhetoric of the “clash of civilizations” was a cynical ploy aimed at manipulating the imagination of the political class in Europe, among other things. This is not the only juncture of overlap between these two conflicts, separated by a quarter century and three thousand kilometers.

In many ways Nagorno-Karabakh served as an inspiration, if not a model, for the Serbian leadership in former Yugoslavia — especially Radovan Karadzic’s Bosnian Serb cadre. Just as they travelled to Bosnia and Herzegovina in the 1990s, paramilitaries from Greece are now traveling to Nagorno-Karabakh to participate in a larger civilizational conflict.

In fact, when the town of Srebrenica fell in July 1995 to the Bosnian Serb troops of Ratko Mladic, four flags were raised: “the Serb, The Greek, that of Vergina and that of Byzantium.” This narrative was such an instrumental part of the Serb effort that Karadzic’s vice president, Nikola Koljevic (romanticized by some Western media as a foremost expert on William Shakespeare), suggested reaching out for the support of allies in “Russia, Armenia, Romania, Greece, Bulgaria, and even Macedonia.”

Karadzic himself was somewhat obsessed with Nagorno-Karabakh. Between January 1993 and July 1994, Karadzic referred to Nagorno-Karabakh on six different occasions from the dais of the Bosnian Serb Assembly. Karadzic’s preoccupations were territorial contiguity of the Serb-held territories in Bosnia and Herzegovina and international recognition of the entity carved out through the tactics of “scorched earth” in Eastern and Western Bosnia.

Karadzic was interested in Nagorno-Karabakh for another reason: unlike Bosnian Serbs, the local leaders there seemingly managed to assume control of the kin state, Armenia, once it became more accommodative to peace. Karadzic failed to do that in the short-term because Slobodan Milosevic saw himself as the leader of all Serbs and had the wherewithal to ensure Bosnian Serb obedience.

That cannot be said of the present Serbian leadership of Serbia — and equally importantly, the intelligentsia — that has allowed the Bosnian Serb political class to steer its foreign policy decisions. In combination with the demonstrated adventurism of the Bosnian Serb administration of Milorad Dodik, this state of affairs does not bode well for the stability of the region in the immediate future.

Here, however, is where the history lesson ends.

The thawing of the conflict in Nagorno-Karabakh and its trajectory is highly relevant to the region of former Yugoslavia today. The status quo established by the Dayton Peace Accords is not undergirded by the force or willingness necessary to preserve it, and consequently, there are several lessons to be learned. One, the deployment of unmanned aerial vehicles (UAV) in Nagorno-Karabakh has revolutionary implications for the future of warfare.

Fortifications built over the past almost thirty years literally unraveled within a week. Two, you get to keep what you are capable of keeping — the international order is once again governed by the principles of self-help and anarchy. Three, Islamophobia is alive and kicking, as reflected in the coverage of the conflict in many major media outlets as well as the official rhetoric in Europe and the West.

In terms of future developments in the Balkans, these seem to be most salient lessons. Nagorno-Karabakh was an early model for internationally unrecognized entities established through murder and persecution, crimes against humanity. It may now serve as a model for how such entities are removed from history.

*The writer is the Director of the Srebrenica Memorial Center. A part-time lecturer at the International Relations Department of the International University of Sarajevo (IUS), Dr. Suljagić is also the author of two books: “Ethnic Cleansing: Politics, Policy, Violence – Serb Ethnic Cleansing Campaign in former Yugoslavia” and “Postcards from the Grave”