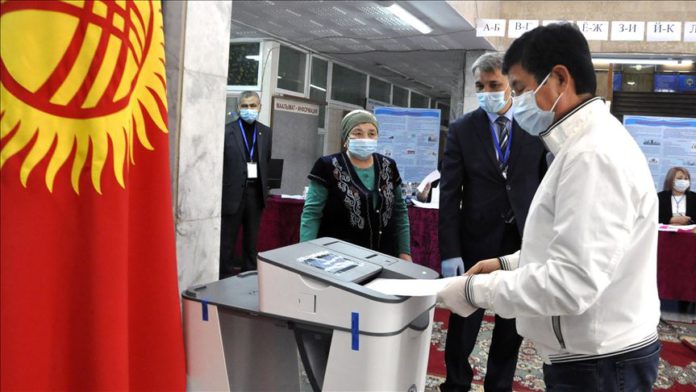 The writer is a UK based analyst and has worked with universities in three Central Asian States.

After presidential elections in Belarus this summer, Kyrgyzstan was the second former Soviet republic, where parliamentary polls were held on Sunday.

Unlike Belarus, where President Alexander Lukashenko is holding the office for the past 26-years, with just one-party enjoying monopoly, Kyrgyzstan had five presidents since its independence in 1991.

On the surface, this makes the country similar to other democracies where popular vote witnesses’ smooth transition of power after every four or five years.

Being a multi-ethnic and multi-lingual country, the core priority of a politician in Kyrgyzstan is to strike a fine balance between the interests of the rural poor in the south and affluent trading communities in the north.

But people having a keen interest in Kyrgyz politics see parliamentary elections a precursor to presidential elections, scheduled in 2023.

As results indicate, parties close to Kyrgyzstan’s President Sooronbay Jeenbekov have dominated the election, according to preliminary data. Out of the 16 political parties, Birimdik (Unity) party, Mekenim Kyrgyzstan (Homeland Kyrgyzstan) party, Kyrgyzstan Party, and Butun (All) Kyrgyzstan party have succeeded to enter into the parliament.

The top two parties Birimdik and Mekenim Kyrgyzstan, which received 24.51% and 23.88% polls, respectively, comprise influential figures including serving senior officials, believing in the status quo, and blessings from Moscow.

Now as the polls are over, the key assignment for the elected members will be to ensure a smooth and comfortable victory for the incumbent President Jeenbekov in 2023.

Asel Doolokeldieva, a noted political scientist, said that elections are usually a test to determine how well the incumbent authorities have devised and executed development projects and schemes.

Critics say, that government executes such schemes in such a way to facilitate favorites to gain a smooth victory, while the rivals are discouraged to even come closer to crossing the minimum vote limit, necessary to enter into the parliament.

In many district and provincial constituencies, newcomers were often encouraged to compete to divide the vote of the opposition. This is a time-tested technique to clears the way for preferred candidates of the establishment.

Like other Central Asian states, Kyrgyzstan politics also appear to be a case of pay-to-play practice, where cash-strapped aspiring politicians turn to businessmen for financial sponsorship, who see it an investment to secure their interests.

Therefore, there is a network of patrons within Kyrgyz political parties to protect the interests of their extended families, tribes, and clans in addition to businesses and financial interests. For the same reason, businesses tend to co-operate with political parties as exemplified by Raimbek Matraimov a Kyrgyz politician, who leads the Mekenim party. He was the deputy chair of the State Customs Service of Kyrgyzstan from 2015 to 2017. He was fired in 2017 after a large scandal of money laundering surfaced in the country.

Analysts believe that protection of interests has over the years trumped over any real program or ideology-anchored politics in the country. This also clarifies the absence of any vote-based accountability.

The fear of accountability is completely blunt in Kyrgyz politics, with loyalties of the politicians remaining fluid and dictated by interests. That makes them switch sides without much difficulty.

Under these ground realities, it is hard to say, whether Kyrgyzstan elections will strengthen the social contract to institutionalize the effective implementation of duties and obligations between those rulers and the subjects.

Further in the race to elections, not much thought is given to manifestoes as they do not command much importance in the strategy. A noted legal expert Gunara Kalikova said there is hardly any distinction between the slogans or promises of different candidates.

She adds that the composition of the political parties highlights tokenism. Although political parties do promise a lot, there is not much action like on the assurances to give more visibility and responsibilities to youth and to ensure better gender representation and meaningful reforms.

Even as Kyrgyzstan politics has many inherent weaknesses, the country will not toe the path of Belarus after the polls, due to its distinct demographic and ethnic composition. The country hosts 73.5% Kyrgyz, 14.7% Uzbek, and 5.5% Russian population besides other smaller ethnic groups. With the parliamentary system of government and the ruling alliance, different ethnicities get representation, who successfully deflect disillusioned or aggrieved dissenters.

Even then, to minimize any probability of potential destabilization — be it street protests or fighting the COVID-19 crisis — the Kyrgyz president turns to Russian President Vladimir Putin. Even last week, Putin announced more health aid and medical supplies to Kyrgyzstan.

While the plurality of political parties in Kyrgyzstan — 16 in total in the election theatre — is appreciable, factions and fragmentation have made the political setup too fragile to allow any of the actors to become popular enough to prevail to win wider support and backing among the masses.

The survival of any political actor, therefore, depends on how well they can serve and sustain the status quo entrenched in tribal affiliations, ethnic loyalties, and the financial interest of business clans. So, to remain relevant, loyalty to the establishment and pledging support to maintain the status quo are two essential prerequisites to survive in Kyrgyz politics.