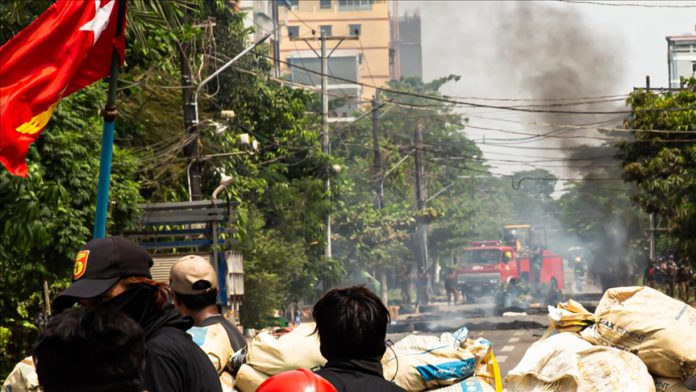 *The author is the director of Amnesty International Indonesia, a lecturer at Indonesia Jentera School of Law, and the founder of Public Virtue Research Institute.

At the time when the world is busy with tackling COVID-19 pandemic, the Tatmadaw – Myanmar’s national armed forces – overthrew the civilian government and overturned election results. It happened at the cost of the lives of those who protest against the military coup, or those who were considered to be against the domination of the Tatmadaw.

Children were among the victims; children who may not understand anything about the ongoing political turmoil. The stories captured are not fully explained or recorded properly, considering the physical restrictions due to the pandemic.

However, various sources indicate more than 48 children died in the crackdown. The most widely cited source is Save the Children, a humanitarian aid organization for children based in the UK. Its data shows a rise in the number of people aged under 18 being killed by armed forces. Of the estimated 521 fatalities, almost 10% are children.

If one were asked to share the underlying motive behind the massacre, it could be said that there was no single pattern that could easily explain it. The real subject being targeted, like in Khin Myo Chit’s story, is family members of those who are accused of resistance.

The seven-year-old girl was sitting on her father’s lap when soldiers raided their home and tried to shoot him, but the bullet hit her sister instead. Another kid was shot dead while he was playing on the street near his house without apparent reason.

The invitation from Brunei Darussalam as the bloc’s current chair clearly has an important meaning in calling the attention of Southeast Asian countries’ leaders to take concrete steps regarding the latest situation in Myanmar.

According to some experts, ASEAN is indeed the only party that can act as an honest broker in the crisis as the Tatmadaw is relatively willing to accept the regional bloc’s initiatives. Other western countries, including the US, also voiced their support for ASEAN in this regard.

Even so, some ASEAN countries seem realistic and pragmatic. According to them, we should not have too much hope at the ASEAN summit and do not expect the bloc to become what it is not. “We can’t expect a fish to fly or climb a tree,” said a senior Indonesian diplomat.

For them, the most prospective solution we can hope for at this time is to realize a peace process, and not the imposition of international sanctions in the form of arms embargo or financial sanctions directed at individual military elites who are responsible for the coup and human rights violations.

Despite rejecting these demands – as conveyed by human rights movements such as Amnesty International – they also appear to be aware that if they hope that the Tatmadaw will give their power back to the Myanmar people voluntarily, these will not happen.

Between pessimism and optimism

It makes sense for ASEAN countries to prioritize security and safety of the people in Myanmar and the Tatmadaw has to guarantee that.

However, the view that suggests we should not be overly skeptical is the one that is too skeptical given the current situation in Myanmar, which has shown that there is actually a possibility that the Tatmadaw can no longer control violence or can no longer maintain its grip on the domestic situation.

In other words, the situation on the ground is getting out of hand. The high command has no longer control over its army. Many residents have fled to the forest or crossed borders. The UN itself is severely impeded from making a solution for the humanitarian crisis the conflict caused.

On the other hand, it is impossible for the Tatmadaw to hand over their power to civilians. With such an uncontrolled situation, is it possible that dialogue will be achieved?

Importance of dialogue and human rights

What is interesting is that it was reported that Myanmar’s junta head Senior Gen. Min Aung Hlaing is set to attend the meeting. The general reportedly will not attend the summit virtually as reported by some media. The most influential general will actually fly to Jakarta.

The question most people ask Brunei, Indonesia and representatives of other ASEAN countries is what answer do we expect from the Tatmadaw leadership when ASEAN has demanded an end to violence? Under what conditions can the Tatmadaw guarantee that violence in Myanmar will end? And what should Indonesia do if the general actually comes to Jakarta?

To be sure, this news indicates that representatives of ASEAN countries are apparently willing to try to get the junta leadership to be open, talk, stop ongoing violence against civilians, and resolve the human rights and humanitarian crises in the country.

They seem to think that goals can only be achieved by maintaining participation and engagement with all parties. If we take sides, ASEAN will never be able to act as a broker that is accepted by all parties.

This is what Indonesia is striving for; especially when several foreign ministries of ASEAN countries, including Indonesia, have communicated with representatives of the Committee Representing Pyidaungsu Hluttaw (CRPH) and the National Unity Government (NUG), including with Dr. Sa Sa, NUG’s minister of international cooperation. If, in the end, the emergency summit of ASEAN leaders will be held physically in a meeting room, then the meeting can run more effectively.

The author, as a non-partisan and human rights activist, does not take a specific position in these developments, and neither supports nor opposes the NUG’s participation. For me, the most important thing is that the emergency summit should be dedicated to protecting human rights in Myanmar and preventing the increasingly severe catastrophe that is hitting the country and the threat it poses.

However, it is clear that the dialogue between the Tatmadaw and the newly formed government are unlikely to happen if violence against citizens and children, and activity of opposition groups continue.

So, of course all parties hope that the most realistic solution to achieve is to end violence first and allow the entry of humanitarian aid at the same time, and the dialogue later.

However, it is still a good idea to clarify the concept of dialogue offered by some ASEAN diplomats. Reflecting on the experience from the era of former Indonesian President Abdurrahman Wahid, the country’s government seems to be offering a cessation of hostilities agreement and dialogue as an inseparable solution to create dialogue and end violence. The challenge now is how to implement this dialogue plan.

In my opinion, it is very important for ASEAN to go extra mile in resolving the political crisis that has implications for the human rights and humanitarian crisis in Myanmar. They should not be pessimistic just because the bloc has a strong culture of not interfering with each other (the principle of non-interference), and blurs the lines between permissible humanitarian intervention and territorial integrity interventions that are not allowed under international law. The act of arguing on this principle must be left at a distance.

In the past, we could never imagine that ASEAN would have a charter, human rights commission and peace institute. But now, it emphasizes important principles such as democracy, constitutional governance, upholding the rule of law, and respecting fundamental freedoms.

So today, when facing the ASEAN emergency summit, the leaders of Southeast Asian countries must think extra, beyond what is impossible in the bloc’s history. Fish can’t fly. But do not forget that there is a flying fish (exocoetidae) in the Atlantic, Pacific and Indian oceans. Although it cannot fly like an airplane, it can still fly high above the sea level at a speed of 50 kilometers (31 miles) per hour.

Indonesia must find a way to direct the ASEAN Intergovernmental Commission on Human Rights to develop a common approach to ensure that all engagement with Myanmar addressing human rights issues is clearly in line with the principles in the ASEAN Charter. This approach should be adopted for dialogue, including exploring the possibility of making Indonesia a third party or engaging a third party that is not from ASEAN.

Furthermore, Indonesia needs to explore the legal implications of Hlaing’s arrival in Jakarta. Indonesia, as a state party to the UN Convention against Torture, has a legal obligation to prosecute or extradite suspected perpetrators in its territory and it must not invite and offer immunity to those suspected of being responsible for the crime of torture.

Indonesia and other ASEAN member states should use universal jurisdiction to initiate investigations into credible allegations against Hlaing. This is a jurisdiction that allows a state to exercise its legal jurisdiction over crimes under international law without having to be dependent on the location of the crime and the national origin of the person responsible for.

Going forward, ASEAN must be able to relinquish its comfortable seats under the pretext of the principle of non-interference in order to begin shoring up the norms and structures of international legal regime created to prevent and deal with very serious crimes under international law; for example, by referring the situation in Myanmar to the International Criminal Court. In that way, perhaps it will be freed from the bloc’s mentality that hinders the promotion and protection of human rights in the region.