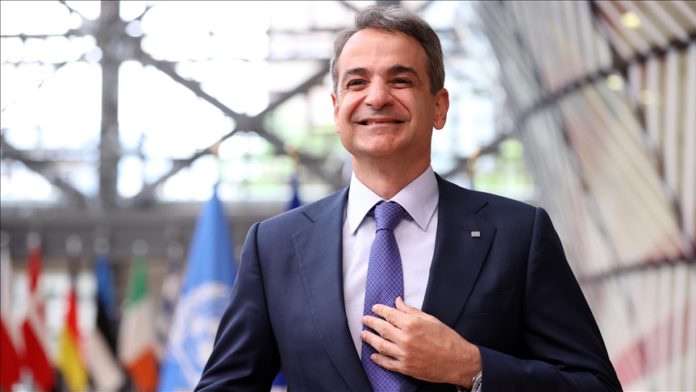 Despite Turkey’s well-intentioned policy and gestures in the Eastern Mediterranean and the Aegean, Greece, emboldened by the US and Europe’s short-sighted foreign policies, wages an undeclared war on Turkey’s interests in multiple fields, perhaps without thinking of possible costly consequences.

At first glance, Greece’s increasingly aggressive and provocative policy and its practices in the field might seem contradictory to its own interests. The Greek economy, which was on the path to recovery from 2018 onward, was hit particularly hard by the pandemic.

Being mainly dependent on tourism and shipping industries, the Greek economy entered a new recession in 2020 as its economy shrunk over 8%. Meanwhile, OECD’s forecast that the Greek economy will grow by 3.8% in 2021 already looks unattainable, considering its performance in the first and second quarter and travel restrictions applied to non-EU travelers.

This adds to the structural problems from which the Greek economy has been suffering for decades, such as mismanagement of public funds, low productivity, small internal market, over-dependence on the service sector, a growing rate of inequality, and insufficient and aging infrastructure.

Furthermore, the Greek health sector, mostly controlled by the state, was not able to present a swift and efficient response, mainly due to immense reductions in the public funds allocated to the health infrastructure and professionals.

Expectedly, this state of affairs draws criticism particularly from left-leaning segments of Greek society. Despite Greek mainstream media’s efforts of curbing opposing voices and presenting Prime Minister Kyriakos Mitsotakis as a “man of the hour” who is willing to take bold steps to transform Greece into a neo-liberal country, both economically and ideologically, the Greek opposition struggles to display an efficient presence, both in the parliament and in the streets.

Pursuing a hardline, provocative, and ideological foreign policy against Turkey serves three main goals in Greece. First and foremost, it is an excellent cover-up for policy failures and domestic problems. If the opposition would ask what the reasons behind the failing economy and health system, the government can always tell them Greece has to allocate more funds for defending itself against “immediate threat from the east.”

It, otherwise, would not be easy to convince the public about the need to buy over-expensive French Rafale and American F-35 fighter aircraft. Similarly, when asked about a significant shift in Greek foreign policy, which is becoming increasingly pro-Israel and pro-American, the “Turkish threat” is a valuable tool to explain the willingness to host more American bases, signing military treaties with Israel and hence abandoning pro-Palestinian stance.

Secondly, presenting Turkey as an existential threat to Greece works well in silencing the leftist opposition in the country. Anyone who points to the possible benefits of having good relations with Turkey or countering the anti-Turkish hysteria is swiftly accused of being a spy, self-hater, or being a victim of Stockholm syndrome. As such, the left is compelled to prove its commitment to Greek nationalism by complying with anti-Turkish discourse and policies.

Thirdly, Greece tries to position itself as a bastion of western interests in the Eastern Mediterranean under the pretext of “defending western liberal democracy and stability.” Being aware that it lags behind Turkey in terms of economic, demographic, and military power, Greece knows it cannot counter Turkey without strong and constant external assistance. Therefore, it needs to keep the anti-Turkish narrative alive to make itself relevant in the eyes of the western public and decision-makers.

In the light of these findings, expecting a sincere rapprochement between Turkey and Greece would be unrealistic, at least when the neo-conservative New Democracy party is in power in Greece. That is also to say, Greece, emboldened by big-ticket arms purchases and seemingly unconditional support from Washington and the EU, can initiate more provocations in the Aegean Sea.

Furthermore, the recent normalization trend in Turkey’s relations with France and Egypt, which are among the major powers in the Mediterranean, can lead Greece to even more provocative policy to incite a response from Turkey, which Greece hopes to use to present itself as a “victim of Turkish aggression.”

For peace and stability in the region, Turkey pursues a cool-headed strategy while vigilantly observing and protecting its own national interests without violating others’ territorial integrity.

However, the West and any other party, who have an interest in a peaceful and stable Near East, should remember that Turkey, with its growing population and economy and treaties, cannot allow violation of its rights derived from internal law.

This has been and will be the case no matter who is at the helm in Turkey. Therefore, it is of utmost importance for Greece and its overt and covert sponsor to realize that cooperation with Turkey in vast areas of common interest like tourism and logistics, will be the most beneficial and feasible solution for itself.