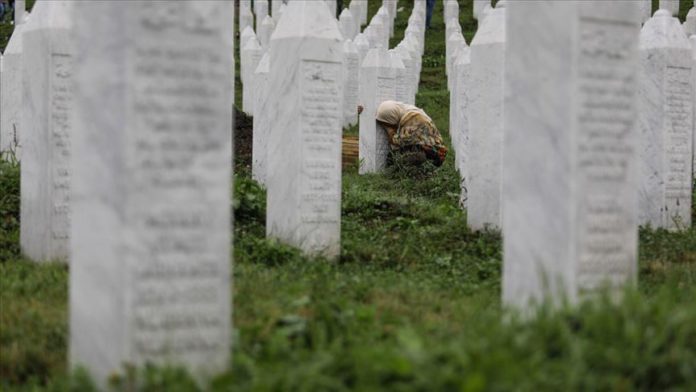 This July will mark twenty-five years since the Srebrenica genocide, when Bosnian Serb military and police forces systematically executed more than 8,000 Bosniak men and boys and deported over 25,000 women and children from the so-called UN “safe zone” in Srebrenica. Twenty-five years later, despite conclusive DNA evidence and the rulings of the world’s most esteemed international courts, denial of these egregious acts persists in the Balkans and around the world.

In the case of Srebrenica, the denial of genocide began in tandem with its execution. In these early stages, denial consisted of the systematic concealment, destruction, and contamination of all evidence of criminal activity. The most elaborate part of this conspiracy was undoubtedly the organized operation to exhume the victims’ remains from primary mass graves and transport them for reburial in secondary or tertiary mass graves, dozens of which were scattered throughout the countryside.

As 1995 came to a close, these acts of denial were undertaken in conditions of utmost secrecy, often under the cover of darkness, with conspirators taking all necessary precautions to obscure their identities. Today, by contrast, denial of the Srebrenica genocide takes place in public, in broad daylight, and without the slightest reticence or concern for anonymity.

The myriad discourses which genocide deniers have developed over the past twenty-five years—from attempts to delegitimize the international courts to disputing the numbers and identities of Srebrenica’s victims—have culminated in the culture of denial that exists today in Serbia and Serb-dominated parts of Bosnia and Herzegovina. Here, in a spirit that can only be described as triumphalism, convicted war criminals like Radovan Karadzic and Ratko Mladic are publicly exalted as heroes and their crimes celebrated as national victories.

Through popular culture, in state institutions, and on city streets, the glorification of genocide and its perpetrators buttresses the rapidly accelerating normalization of ethno-supremacist violence.

Serbian nationalists in the Balkans are not the only parties complicit in this process. One of the most egregious acts of genocide denial this past year came not from officials in Serbia or Republika Srpska but from the international community, with the decision to award the Nobel Prize in Literature to avowed genocide denier Peter Handke.

Genocide denial magnifies the suffering of survivors and victims’ families. The attempt to invalidate past trauma targets the living memories of these painful experiences, which are integral to collective processes of identity rehabilitation as well as individual psychological reckoning.

Renewed and expatiated anguish, however, is only one opprobrious consequence of genocide denial. In the absence of a societal consensus on the historical fact and moral delinquency of past violence, the perpetrators of genocide are emboldened, and their causes vindicated. Pervasive denial of past atrocities is among the surest portents of resurgent violence.

In joining the fight against genocide denial, we not only stand in defense of truth and justice; we help to ease the pain of the suffering, and to protect the innocent from future slaughter.

This cause is no less exigent in times of great global uncertainty. While the recent pandemic may tempt us to turn inward and away from all matters outside our immediate families or communities, it is critical that we resist this urge and instead challenge ourselves to gain perspective from these trying times. As well as wreaking great loss and anxiety, the COVID-19 pandemic has demonstrated the breadth of human compassion and our enormous capacity for worldwide solidarity.

Hatred is merely another form of lethal virus. That this virus is no less deadly than any pathogen is one of the enduring testaments of human history.

The twenty-fifth anniversary of the Srebrenica genocide is a poignant reminder of our collective responsibility to protect human life and human dignity. Disease, violence, and injustice are only some of the forces which threaten the vulnerable members of our society.

This July, a quarter of a century after the genocide in Srebrenica, it is more important than ever to honor the memory of Srebrenica’s victims. Even as we physically stay home and stand apart, we have a moral responsibility to show up and stand together in the name of truth and justice for the victims and survivors of genocide. To do otherwise—to be deterred by fear, to let the twenty-fifth anniversary of the Srebrenica genocide pass in silence—would be an affront to the brave men and women of Srebrenica, a dereliction of duty, and above all, yet another victory for the unrepentant perpetrators and deniers of genocide.

(For more information on how you can help and the latest updates on the virtual commemoration for the twenty-fifth anniversary of the Srebrenica genocide, follow the Srebrenica Memorial Center on Facebook and Twitter  or visit our website at www.srebrenicamemorial.org)