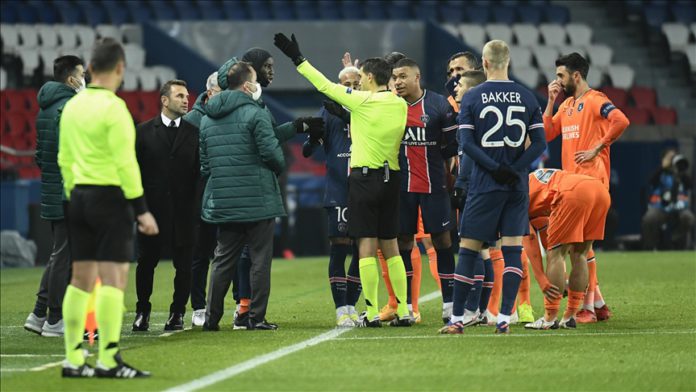 – The writer is an ​​attorney and a sports law expert.

The racist act committed during the Champions League match between Paris Saint-Germain F.C. and Medipol Basaksehir F.C on Dec. 8, 2020 by the fourth referee appointed by UEFA highlighted how prevalent racism has become in European football and that such racist acts could be committed even by the referees, while shedding light on the incapacity of football authorities, including UEFA, in preventing such incidents.

Başakşehir F.C. assistant coach Pierre Webó protested the referee’s decision and was then punished with a red card at the beginning of the game. Whether the said decision was just or unjust is not the issue. Rather, it was the Romanian fourth referee (also known as ‘reserve referee’) Sebastian Coltescu using Pierre Webó’s skin color to identify him to the main referee Ovidiu Hategan, and also the use of a racist statement towards Pierre Webó by Coltescu that sparked such controversy. The players of both clubs left the field following the incident, and said that they would not be continuing the game unless the fourth official who committed the racist act was sent off the pitch. The match was suspended and completed the following day on Dec. 9, 2020.

Many football fans and athletes from many other sports reacted to this incident by not remaining silent after the racist attack on Pierre Webó. In addition to clubs and individual athletes, how the Romanian Football Federation, with which the fourth official is affiliated, would respond to the incident was awaited with curiosity. Romanian Minister of Youth and Sports Ionuț-Marian Stroe apologized to the entire sports community on behalf of the Romanian athletes after the incident and openly stated that the person and the racist act did not represent Romanian sports. The French minister delegate in charge of sports shared similar thoughts and stated that she was proud that the players of both teams gave the same reaction.

Following the strong reactions to the incident, the following day UEFA independently opened an investigation about the fourth official who made the racist remarks, referring the case to its Control, Ethics and Disciplinary Body. The said referee is expected to receive a serious penalty from UEFA as a result of the investigation.

In normal circumstances, UEFA penalizes teams who withdraw from games. However, UEFA is expected to make an exception for this incident and not punish the teams.

Even if the fourth referee is given a serious penalty as a result of the investigation, UEFA will surely continue to be criticized, considering that the incident took place within the organization and was committed by a referee educated by UEFA itself. Moreover, it should also be noted that many football authorities, including UEFA, fall short of putting up a decisive struggle against racism and fail to make the necessary decisions and implement deterrent measures with regard to racist acts.

Racism has long been on the rise in European football, and the sport, especially for those on the receiving end of such racist acts, is becoming unbearable. The increase in such racist acts also shows in the statistics.

According to the statistical data published by Kick it Out, one of the most important organizations that fight against racism in football, racist incidents increased by a whopping 53 percent in the 2019-20 season alone, compared to the previous year. Another study, published by the Professional Footballers’ Association (PFA), reports that 43 percent of the footballers playing in the Premier League became victims of racist comments on Twitter at least once during their football career.

According to the report, players who are exposed to racism suffer from emotional and psychological issues and disorders, and they also end up needing counseling and therapy during their recovery period. This is due to the long-lasting negative effects that racist acts have on the athletes, such as stress, depression and fear.

A number of notorious racist acts that have previously taken place in the football world came to mind after the racist remarks made against Pierre Webó by the fourth official. Such acts have been unfortunately committed numerous times by clubs, players and fans in the past.

In a match played between the British and Bulgarian national teams in 2019, British players were subjected to the racist cheers and behavior of the Bulgarian fans. Following the incident, the Bulgarian national team was given a $83,000 fine as well as a one game stadium ban penalty by UEFA. The punishments delivered by UEFA did not satisfy the public, which found them insufficient. Egyptian Muslim footballer Ahmed Hossam Hussein Abdelhamid, also publicly known as “Mido”, was also subjected to Islamophobic remarks by the fans of Newcastle United F.C. while playing for Middlesbrough F.C. in England. However, those who shouted the racist comments did not face an adequate punishment, either.

The football world has seen many inappropriate acts, mostly committed by fans and footballers. But unfortunately football authorities have so far failed not only to penalize the acts properly, but also to take necessary action to eradicate racism.

No such racist acts are known to have been committed by a referee in the football world prior to the one committed against Pierre Webó by the reserve referee. There was just one allegation against Mark Clattenburg, the head referee of a match between Manchester United F.C. and Chelsea F.C. in 2012. It was claimed that after the game he committed a racist act. Following the game that Chelsea lost, during which two players from Chelsea were dismissed, a Chelsea goal was cancelled and all referee decisions following that were made against Chelsea, the football club alleged that the referee Clattenburg made racist statements to footballer John Obi Mikel.

Referee Clattenburg made history as the first referee accused of involvement in a racist act but was acquitted. Many are wondering now what kind of decision will be made about referee Sebastian Coltescu, given that it is recognized by everyone that he committed a racist act against Pierre Webó.

FIFA and UEFA’s attitude towards racism

One of the fundamental principles of both FIFA and UEFA is to ensure diversity between players and to prevent discriminatory acts. The five main elements under this approach are Controls & Sanctions, Regulations, Communications, Education and Networking & Cooperation.

FIFA and UEFA combat racism under these five main titles. In their regulations, they make anti-discriminatory statements and determine the punishments that must be faced by those who do not comply with them. They also utilize communication tools and campaigns to raise awareness on racism. All competition officials, including FIFA and UEFA staff and referees, are trained for the prevention of racism. FIFA and UEFA also contact all member countries’ confederations and federations, demanding the necessary sensitivity to be shown towards racism-related issues.

Although FIFA and UEFA’s attitude towards racism and their strategic plan on this issue seem successful, problems arise in the implementation of said penalties and the training of their staff, including match officials. The fact that a referee trained and appointed by UEFA committed a racist act might be a sign that UEFA has systemic problems and is not able to educate its own officials sufficiently against racism.

Punishment Coltescu is likely to receive

UEFA will finalize its decision on the Romanian referee after the disciplinary investigation is over. Coltescu is likely to face a severe penalty if it is established, based on the reports of UEFA representatives present in the match, that he indeed committed the alleged acts.

Another issue where UEFA falls short is that it is not clearly stated in the UEFA Disciplinary Regulations what to do when one of the officials or their representatives is the subject of a racist act, while the punishments that clubs, athletes and fans would face are distinctly organized.

While it is not clearly stated what kind of punishment the officials would face after a racist act, the first paragraph of Article 14 of the UEFA Disciplinary Regulations should be considered regarding Coltescu’s situation. In the said article, it is expressed that if it is determined that any person subject to UEFA Disciplinary Regulations was involved in a racist act, they will be banned from at least 10 competitions. The duration of the sentence can be increased if deemed necessary by UEFA, and additional penalties may be imposed by UEFA to the person who committed the racist act.

As such, UEFA must ban Coltescu from at least 10 competitions in accordance with the UEFA Disciplinary Regulations. However, whether Coltescu will be assigned to a UEFA match as an official again or not will be entirely up to UEFA following the investigation.

*Translated by Can Atalay