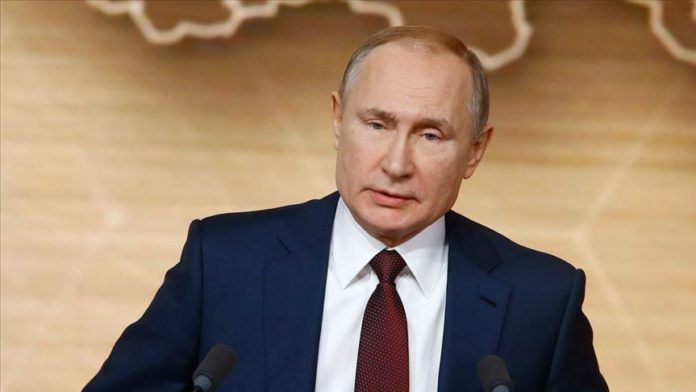 The writer is a Researcher at TRT World Research Center

Putin has maneuvered himself and the Russian government into a position of ‘Zugzwang’ — a chess term denoting a situation in which one’s king has to move, but cannot, because any move would result in a check.

Back in January, Russian President Vladimir Putin announced his support for a constitutional change that would ‘reset’ the clock on his previous terms in the office, giving him the right to once again run for the presidency and stay there until 2036. By then, he will be 84 years old and — if he makes it — the longest-ruling leader in Russian history.

These proposed amendments gained international attention, bringing extreme political upheaval, both domestically and internationally. However, Putin’s carefully crafted plan could not come at a worse time for Russia. The vote was initially set for April 22, and no new date has been announced.

Now it seems that a microscopic virus could be detrimental for the political myths, cultivated by Putin, of being the country’s protector as problems are piling up for the man who has dominated Russia since 2000. Anything that messes with that image, whether it is large-scale virtual protests or economic instability, ruins the myth he and his allies have been reproducing for decades.

The Kremlin has a clear domestic target to consolidate society through a systematic appeal to traditional conservative values. Therefore, the proposed changes would re-write Russia’s identity as a conservative nation that will be built on core values such as traditional families, respect for the elderly, patriotism, and religion.

For the first time since the fall of the Russian Empire in 1917, the country’s constitution may include a reference to religion and God. For years he has cultivated a particular conservative image for the Russian public, a man of ‘action’ and a patriotic guardian of the country’s history and values. However, the ever-increasing outbreak bounced in Russia reporting more than 10,000 new COVID-19 cases for the sixth day in a row, and now it presents an unexpected test for the institutions and the system that Putin has built.

As the number of confirmed cases of the virus is accelerating rapidly in Russia, COVID-19 puts overwhelming pressure on its finances from an oil price war due to the OPEC+ agreement on production cuts. These recent dynamics could shake the country’s economy as the government is trying to shift from the political considerations of amending the Constitution to curbing the rapid spread of the virus across Russia.

Russia is still a petro-driven economy, and the combination of lower oil prices and lower oil production as a result of the OPEC+ deal is likely to increase Russia’s weaknesses in the structure of oil markets.

Lower oil prices are bad news for the Russian economy, hitting not only the Russian government’s day-to-day budget but also the country’s funds, which were built up over years of stable oil prices. The combination of the pandemic and the fall in oil prices has hit the Russian economy hard. Moscow and St. Petersburg are now under citywide quarantines. The Kremlin is also pushing regional governors to adopt stricter measures, as the pandemic has been spreading across the Russian territory.

Russian officials have urged its citizens to stay home, while, however, giving companies little tangible support. Therefore, anger is growing at what many say is a lack of adequate support from the state to ordinary people and small and medium-sized businesses. The people’s resentment was expressed online using the ‘conversations’ tool on the mobile apps Yandex.maps and Yandex.navigator. Some consider these digital protests as a threat to Putin’s post-Corona regime.

The first protest occurred in the city Rostov-on-don when the Rostov Mayor’s Office introduced changes to the procedure for obtaining travel permits. Employers are required to purchase travel passes on behalf of their employees. However, there are only nine points of distribution for these passes and employers are supposed to call ahead. Residents complained that they were unable to get through the digital platform.

Subsequently, long lines formed at the issuance points on April 20, and other virtual rallies popped up in other cities across Russia. The organizers invited supporters to send them “virtual” placards that will be shown live during the protest. Locals also dropped pins near the government buildings and wrote messages of complaint about the difficulties of self-isolation orders, ranging from lost jobs to ineligibility for social assistance. Users mostly complained about the financial challenges and the loss of jobs they are facing due to self-isolation. Tens of millions of Russian citizens have lost  all or part of their incomes, sit in isolation, and receive no financial support from the federal center.

Stability has become ruined, and Putin’s role has come under scrutiny. Trust in Russian state media is low, as a recent poll from the Levada Centre, an independent polling organization, found that 59 percent of Russians do not fully believe the official figures on COVID-19. Putin twisted himself into policy as well as rhetorical knots through his insistence to stay in power. Next year, the regime will be in the survival mode, and managing public opinion appears to be a top concern.

In any case, with tens of millions of Russians struggling financially, there is no enthusiasm right now for Putin’s constitutional amendments.