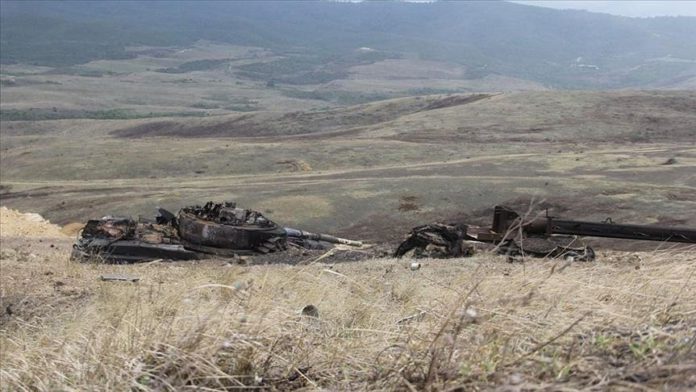 “The first casualty when war comes is truth, and whenever there is a war, and whenever an individual nation seeks to coerce by force of arms another, it always acts and always insists that it acts under self-defense,” US Senator from California Hiram Johnson said in 1929.

On Sept. 27, an open armed combat broke out within the internationally recognized borders of the Republic of Azerbaijan, when Armenian occupiers of Azerbaijan territory attacked Azerbaijani-populated towns and villages east of the occupied Nagorno-Karabakh region. Armenian forces have occupied the region since early 1990s and have ignored four separate UN Security Council resolutions, which demand the Armenian forces to be withdrawn from Azerbaijan.

This combat followed attacks by Armenia on July 12, 300 kilometers (186.4 miles) northwest of the occupied Nagorno-Karabakh region. Those attacks were across the internationally recognized borders between Azerbaijan and Armenia. The attacks served notice to Azerbaijan that oil and natural gas pipelines from Azerbaijan to the Republic of Georgia, Turkey, the Balkans, and other countries are vulnerable to Armenia’s assaults and their Russian-supplied weapons and missiles.

Now, because Turkey has publicly announced that it supports Azerbaijan’s territorial integrity and its counteroffensive measures, Armenian lobby structures in the US are blaming the new combat on Turkey, not Armenian forces who regularly fire big guns into Azerbaijan.

NPR (National Public Radio) has an interesting take on the charge that Turkey is funneling Syrian mercenaries into Azerbaijan to fight Armenians; it quotes an official Russian readout of a conversation between Russia’s leader Vladimir Putin and Armenia’s Prime Minister Nikol Pashinyan; to wit: the presence of “militants of illegal armed units from the Middle East.”

It should be remembered that Russian troops are in Syria, together with an Armenian contingent, helping Bashar al-Assad keep his dictatorship. Additionally, Russia has Russian mercenaries there also, though it denies any official connection to the “hundreds of Russian mercenaries” killed by American forces in 2018.

According to Armenia: “No fire of any kind is being opened from the territory of Armenia in Azerbaijan’s direction.

“… Armenia has not fired towards Azerbaijan from any kind of weapon. This is just one more consequence of the desperate convulsions of the Azerbaijani side. … The truth is all missile shots and all artillery barrages against Azerbaijan are from the Azerbaijani territory.”

Armenian missiles were fired into Azerbaijan’s second largest city, Ganja, on Oct. 4, killing and wounding many civilians, and the order to attack Ganja came from the so-called Arayik Harutyunyan, the president of the illegal regime Armenia has installed in Karabakh: “I ordered to bombard Ganja military facilities…”

Here in the US, information about the crisis in the Caucasus is presented by Armenian sources that lobby for Armenia and its criminal occupation of Nagorno-Karabakh and seven adjacent districts of Azerbaijan full-time through paid professional staff and campaign contributions to dozens of American Congress people and senators. No wonder Congressman Adam Schiff, for instance, accuses US President Donald Trump of close links with Russia, on the other hand, defends with all his might the outpost of Russia in the South Caucasus-Armenia. The same is true about Senator Bob Menendez and many others on the Hill.

The culprit? The American National Committee of America (ANCA).

I have brought attention to ANCA before, when I asked why it is not required to be registered as a foreign agent; reason (was that) — it lobbies full time for Armenia using professional, paid staff to convince America’s Congress to finance Armenia’s government with direct aid regardless of their aggression and illegal occupation of 20% of their next door neighbor Azerbaijan.

ANCA brags it killed the presidential appointment of Matthew Bryza to be ambassador to Azerbaijan; it did so on behalf of Armenia. ANCA was active in convincing American agencies and international business banks from assisting Azerbaijan’s efforts to complete 600 miles of rail links in its territory that completes a direct rail link from China to Europe without an inch of the new rail system in or through Russia. ANCA did so at Armenia’s request.

These direct interventions on behalf of the Armenian nation might very well be illegal. The US government should look into ANCA for violating its legal status as a sanctioned “charity” group.

Further, as Paul Stronski wrote for the (US-based think tank) Carnegie Endowment for International Peace, “the administration of President Donald Trump has yet to issue a policy on the South Caucasus region, creating a vacuum that other powers — including Iran and Russia – appear eager to fill. The lack of senior level response to the latest violence shows once again that Washington does not see the Caucasus as a priority.”

The US government must pay closer attention to the conflict than it has; it is, in my opinion, the only objective actor that can calm the conflict and push all sides to resolve the festering problem before thousands more die.

[ The writer has authored 15 books and over 1,300 articles. His book “The Armenian Lobby & U.S. Foreign Policy” published by Berkeley Press is the first book on this subject published in the US. ]