TurkishPress
Home News One year on, Hong Kong politics yet to settle down 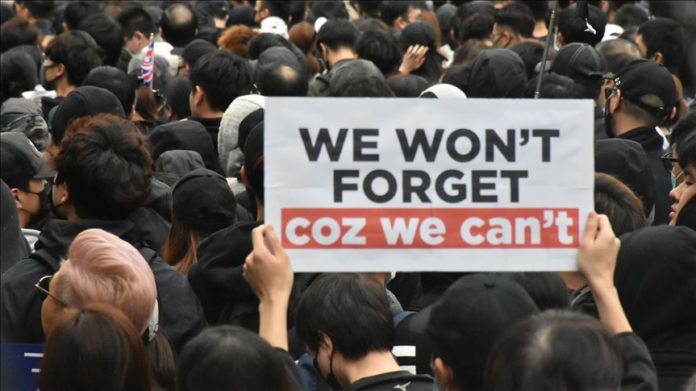 A pro-Beijing lawmaker was elected to lead a key committee in Hong Kong’s Legislative Council (LegCo) on Monday, raising concerns that the legislature will clear the path for bills that aim to control basic human rights.

Starry Lee of the DAB party, dubbed a “Beijing favorite,” was elected House Committee chairperson with an absolute majority of the vote amid protests from opposition democrat lawmakers, the Hong Kong Free Press website reported.

The committee decides about business of the legislature.

“There is concern right now among people that the new committee will prioritize the National Flag and National Emblem Bill,” said Chien-Yu Shih, who teaches politics and international relations in Hong Kong.

He said the controversial bill, if passed, would make deliberate alterations to the anthem and derogatory performances punishable. Violators will be fined and jailed.

Hong Kong, an autonomous region under China since 1998, has been witnessing protests since early June against the Carrie Lam administration’s move to legalize extradition to mainland China.

The fresh resentment among people comes amid the novel coronavirus pandemic and follows months of protests in 2019 over the now dumped extradition bill brought by the Lam administration that left the city reeling, with international financial observers expressing concern over the economic prospects of the business hub.

“Besides, there is a law which draws its inspiration from Article 23 of the Hong Kong Basic Law that calls on Hong Kong’s LegCo to pass its own National Security Law,” said Shih, who is also executive secretary of the Taiwan-based Association of Central Asian Studies.

“What we are witnessing over some time now is that the Liaison Office of the Central People’s Government [China] in Hong Kong is increasingly interfering in the affairs of Hong Kong,” said the academic, “something that was not seen in past…Hong Kong authorities once attempted to justify the power of ‘supervision’ of the liaison office supervising Hong Kong affairs.”

“Beijing is thinking to strike hard and with a heavy hand, and the time is near,” he said.

He argued that the law regarding national security was delayed for years.

“Why is there urgency now? That is why we have seen that lawmakers representing democrats, supporting the democracy movement have been arrested and are being sued…That is the first step towards mowing down dissent.”

“If such a law is passed, there is fear among people, even those who work in government, that basic human rights will possibly be stripped away,” he said.

He claimed the Chinese authorities were “working to purify, cleanse Hong Kong from those who express dissent…or at least scare others as not to speak in the future.”

China has held sovereignty rights over Hong Kong under the “One Country, Two Systems” policy ever since the UK handed over the city to Beijing in 1997.

“This policy is a Chinese strategy for integration. But from the Hong Kong side, it is an instrument to protect their own way of living. Hong Kong society in general and even government officials share a certain attitude as such. However, they pretend to be submissive to Beijing because they are part of their system,” he maintained.

“There is a perception gap between Beijing and Hong Kong, and it is more visible than ever.”