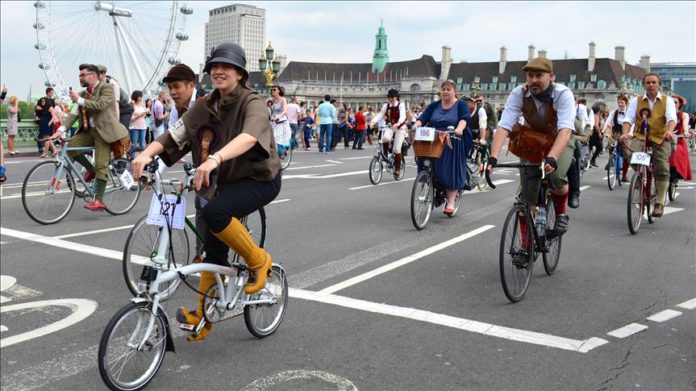 In many ways, the coronavirus pandemic has slowed the world down. Every cloud has its silver lining, however, and one unexpected effect of the outbreak has been to speed up the adoption of cycling in countries around the world.

The UN says that cycling is not only good for your health, but also reduces inequalities in society – the urban poor often cannot afford cars – while also being cost-effective for governments. This is all before mentioning the obvious environmental benefits.

For these reasons, in 2018, the UN General Assembly declared June 3 World Bicycle Day.

“A poll carried out by YouGov on behalf of Cycling UK shows that just under one in 10 (9%) of people in the UK are cycling more during the crisis,” Richard Wevill, communications and media officer at Cycling UK, told Anadolu Agency.

Cycling UK is a British charity that lobbies on behalf of cyclists and promotes cycling more generally.

“The Cycling UK website, which contains tips and advice on starting cycling, has also been recording record traffic since March, which suggests more people are seeking out information to help them incorporate cycling into their daily exercise,” Wevill said.

“The same survey found that 36% of people could rethink their travel habits in the future and use cars and motorized vehicles less,” he added. “Many of these respondents also cited the need for better cycling infrastructure as one factor discouraging them from doing so.”

According to the BBC, the latest government survey before the lockdown found that 61% of Brits said cycling on the road was too dangerous.

On May 9, the UK government announced its largest ever boost for cyclists, which alongside more money also included setting up emergency bike lanes and streets.

An emergency £250 million ($312 million) travel fund was created for use in England to set up pop-up bike lanes, safer junctions and cycle-only corridors.

It is the first phase of a £2 billion investment in cycling that in turn is part of a £5 billion package of funding for bikes and buses announced last February. From June, the government will also hand out up to half a million £50 vouchers for people to get their old bicycles repaired.

Cycling UK has called on local authorities to set up pop-cycle lanes and widen pavements to create more cycling space and has even set up an online form for ordinary Brits to contact their local councilors and raise the issue.

“Governments in Scotland and England have announced extra funding for active travel, so this money now needs to be allocated to the projects which can have the most impact on cycling take-up,” Wevill said.

As well as being healthier and greener, increased cycling will also reduce crowding on public transport, which in turn will help maintain social distancing.

Announcing the government measures, Secretary of State for Transport Grant Shapps said: “During this crisis, millions of people have discovered cycling – whether for exercise or as a means of safe, socially-distanced transport.”

“When the country does get back to work, we need those people to stay on their bikes and be joined by many more,” he said.

“Otherwise, with public transport’s capacity severely restricted at this time, our trains and buses could become overcrowded and our roads gridlocked – holding up emergency services, critical workers and vital supplies.”

Wevill agreed: “As we exit lockdown, more people walking or cycling to work would help prevent overcrowding on public transport, where the virus can more easily be spread. For exercise, cycling has been demonstrated to benefit both physical and mental health.”

On your bike, coronavirus

According to the UN, World Bicycle Day encourages member states to “advance the use of the bicycle as a means of fostering sustainable development, strengthening education, including physical education, for children and young people, promoting health,

UN member states are encouraged to include cycling in their national development programs, improve road safety and sustainable transport infrastructure, and promote cycling in their societies by organizing bicycle rides at national and local levels.

The pandemic has put a spanner in these kinds of promotional activities, however.

“Many awareness-raising events are adapting and changing to reflect the current situation,” Wevill said.

“For example, this year Cycling UK’s Bike Week (June 6-14) is going virtual with a range of online events because many of our planned participation events are not possible because of the current crisis.”

While the coronavirus may have stalled the promotion of cycling in the short term, it just might make it mainstream in the long term. “On your bike!” as the Brits say.