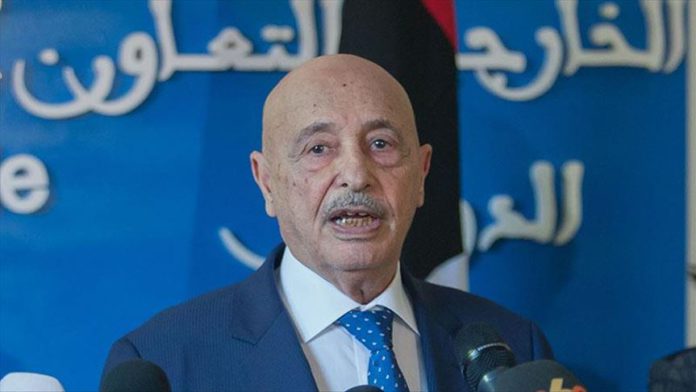 The head of Libya’s Tobruk-based parliament Aguila Saleh arrived in the neighboring Algeria on a surprise visit on Saturday.

Algeria’s official TV said that Suleiman Shanin, the head of the National People’s Assembly, the first chamber of the Algerian parliament, and Foreign Affairs Minister Sabri Boukadoum received Saleh at the Algiers International Airport in the capital.

The source did not mention the duration and objectives of the visit, which coincides with the Libyan army’s victories over the militia of warlord Khalifa Haftar.

On Friday, Algerian President Abdelmadjid Tebboune, in an interview with a local media outlet, reiterated his country’s offer to assume the role of mediator in the Libyan crisis.

“The solution in Libya will not be military,” Tebboune said, stressing that Algeria “stands at the same distance from all [Libyan] parties.”

After suffering military defeats in Libya’s western region against the internationally recognized Tripoli-based government, Haftar has called for a cease-fire and a political solution to the conflict.

The Libyan government launched Operation Peace Storm in March to counter attacks on the capital and recently regained strategic locations, including Al-Watiya airbase.

The army inflicted heavy blows on the renegade commander and liberated Tripoli and Tarhuna from his militias.