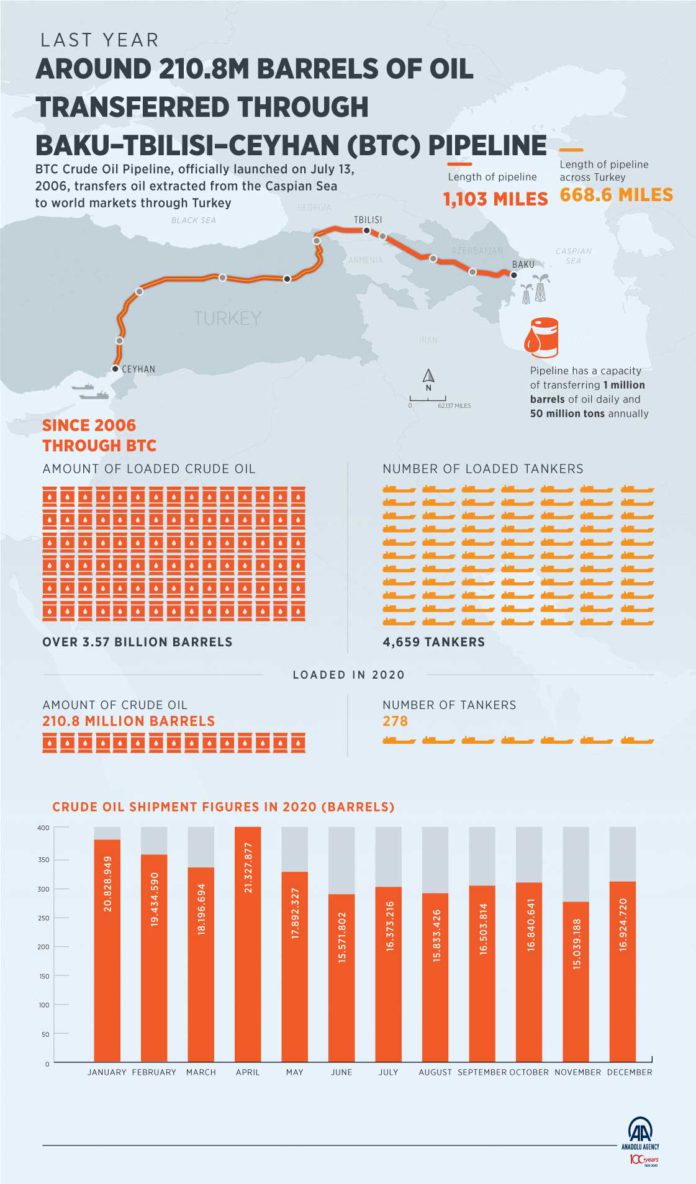 The Baku-Tbilisi-Ceyhan (BTC) oil pipeline delivered the highest monthly volume of oil in April despite newly emerging lockdowns and restrictions in several European countries, according to the latest data from Turkey’s petroleum pipeline corporation BOTAS.

The BTC pipeline, which delivers Azeri oil to international oil markets through the Ceyhan marine terminal in Turkey’s southern Adana Province, pumped the highest volume of oil at 21.3 million barrels in April.

During this month, several European countries, including Germany, France, Denmark, Italy and Greece started imposing lockdowns and different levels of containment measures with the rise in the number of coronavirus cases.

According to BOTAS, the lowest volume was recorded in November with 15.04 million barrels.

BOTAS figures showed that the BTC oil pipeline delivered over 210.7 million barrels of Azeri oil loaded on 278 oil tankers last year, marking a 9.6% fall compared to 2019 when it pumped around 233.1 million barrels.

Since operations began in 2006, the total amount of oil supplied via the pipeline amounted to more than 3.5 billion barrels.

The oil delivered through the 1,776 kilometer-long BTC pipeline was loaded on more than 4,659 oil tankers over the past 15 years to reach the global oil market.

The BTC pipeline delivers Azeri light crude — mainly from the Azeri-Chirag-Guneshli field — through Georgia to Turkey’s Mediterranean port of Ceyhan for further export via tankers.

The seven oil tanks in the Ceyhan region each hold a storage capacity of 1 million barrels, in addition to 51 valve stations, four pump stations and two pig stations.

The annual oil transit amount in 2007, one year after the pipeline’s inauguration, was around 210 million barrels, BOTAS figures showed.

The monthly oil transit volumes in 2020 are set out below: