TurkishPress
Home News Oil down over expected rise in US stocks, rising dollar 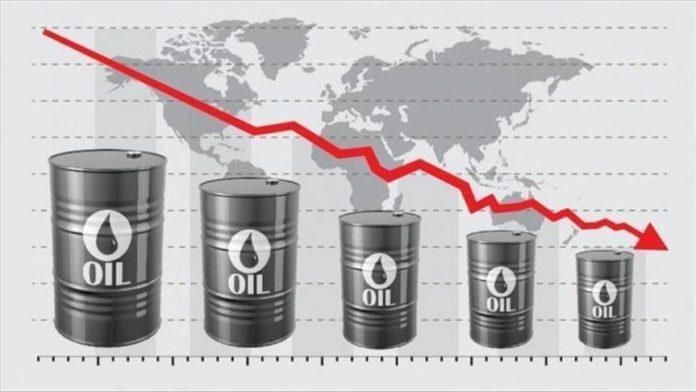 Oil prices declined on Wednesday over the double whammy of an expected rise in US crude oil inventories and the rising value of the dollar, making US-dollar-priced oil more expensive and discouraging investors.

American benchmark West Texas Intermediate (WTI) was at $63.40 per barrel at the same time for a 0.95% drop after it ended the previous session at $64.01 a barrel.

Late Tuesday, the American Petroleum Institute (API) announced its estimate of a rise of over 12.8 million barrels in US crude oil inventories relative to the market expectation of a 833,000-barrel fall.

After US crude oil inventories rose last week by 21.6 million barrels, marking the biggest increase on record since 1982, the new projected massive increase in crude stocks led to investor caution.

The expected rise in the country’s inventories signaled falling crude demand in the US, the world’s largest oil consumer, and weighed on oil prices.

However, last week’s surprising announcement by the Organization of Petroleum Exporting Countries (OPEC) and non-OPEC countries, known as OPEC+, to keep the current production level unchanged, rather than increasing it in line with rising oil prices, offset demand concerns caused by the huge US crude inventory build.

Crude oil prices, which are indexed to the US dollar, also came under pressure with the rising value of the greenback.

The US dollar index, which measures the value of the American dollar against a basket of currencies including the Japanese yen, British pound, Canadian dollar, Swedish krona and Swiss franc, rose 0.26% to 92.20.