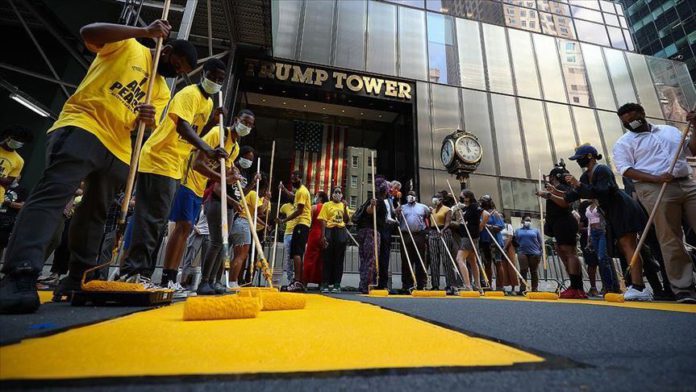 “Our city isn’t just painting the words on Fifth Avenue. We’re committed to the meaning of the message. #BlackLivesMatter,” the mayor posted on Twitter with a photograph in which he can be shown as painting a part of the mural with the rest.

On July 1, Trump took Twitter to denounce New York City’s plan to paint the sign and said: “NYC is cutting Police $’s by ONE BILLION DOLLARS, and yet the @NYCMayor is going to paint a big, expensive, yellow Black Lives Matter sign on Fifth Avenue, denigrating this luxury Avenue.”

“This will further antagonize New York’s Finest, who LOVE New York & vividly remember the horrible BLM chant, ‘Pigs In A Blanket, Fry ‘Em Like Bacon,” he warned, referring to a chant used in 2015 against police.

Trump also urged police to side with him and prevent the painting.

Black Lives Matter gained momentum in the wake of the killing of George Floyd, an unarmed black man in police custody May 25.

Floyd, 46, died after being pinned down by a white police officer in Minneapolis, Minnesota after reportedly attempting to use a counterfeit $20 bill.