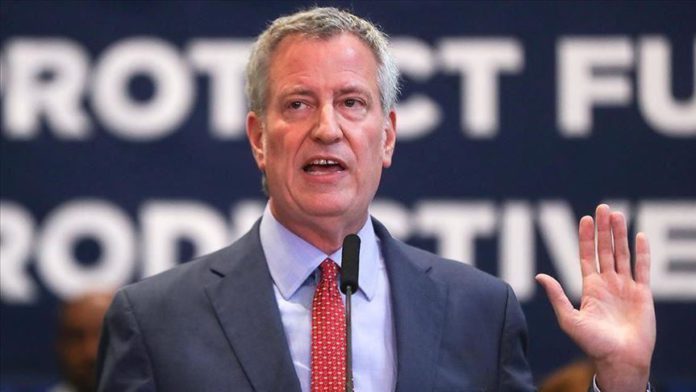 New York City Mayor Bill de Blasio said that large gatherings amid the fight against coronavirus will not be tolerated, adding “the time for warnings has passed.”

His remarks came late Tuesday following a major Jewish gathering for a rabbi’s funeral in Brooklyn, where a large Jewish population resides.

“Something absolutely unacceptable happened in Williamsburg tonite: a large funeral gathering in the middle of this pandemic,” the mayor said on Twitter. “When I heard, I went there myself to ensure the crowd was dispersed. And what I saw WILL NOT be tolerated so long as we are fighting the Coronavirus.”

The mayor said the New York Police Department (NYPD) now has extensive authorization in efforts to “stopping the disease and saving lives.”

“My message to the Jewish community, and all communities, is this simple: the time for warnings has passed,” he wrote. “I have instructed the NYPD to proceed immediately to summons or even arrest those who gather in large groups.”

Saying that he understands the instinct to gather to mourn after losing many people last two months, the mayor added: “But large gatherings will only lead to more deaths + more families in mourning.”

“We will not allow this,” he said. “I have instructed the NYPD to have one standard for this whole city: zero tolerance.”

NYC has over 162,300 virus-related cases and 17,682 deaths, according to the running tally of Maryland-based Johns Hopkins University.

Meanwhile, the US continues to lead in COVID-19 cases and deaths worldwide. The Hopkins data counted over a million infections and more than 58,350 deaths in the country, with nearly 116,000 recoveries.

Qatar film fest: You Will Die at 20 wins audience award