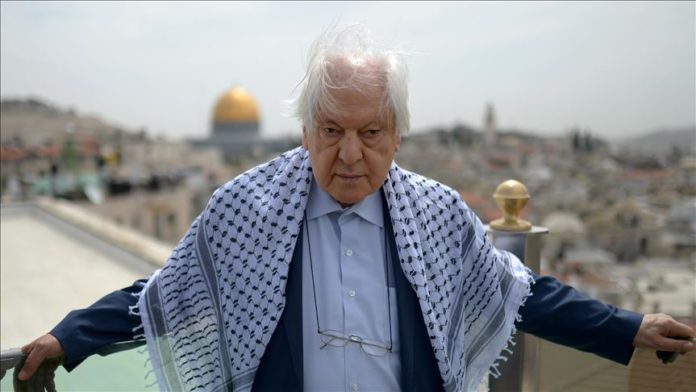 The people who Nuri Pakdil, also known as the “Poet of Jerusalem,” spent most of his time with remember him dearly and shared their stories with him before his death in 2019.

Necip Evlice, a Turkish author and poet who knew Pakdil for 50 years, shared his memories about him.

The name Idris Hamza was given to him by Pakdil, he recounted, adding that this later became his pen name and pseudonym within their circle.

“Pakdil always promoted new things and learning. He was fond of improvement and novelty,” Evlice said. “He thought that everyone needs to know a foreign language at least enough for reading and researching.”

Pakdil himself spoke three languages, Turkish, French and English, also learning some Kurdish to gain a better understanding of the debates on the Kurdish population in Turkey.

Besides being an author, poet and thinker, he also translated many books from French into Turkish, including the works of Eugene Ionesco, Jacques Prevert, Eugene Guillevic, and Anna Dostoyevskaya.

Evlice said he had some projects through which he would cherish Pakdil’s memory.

“My priority, for now, is to open a foundation after his name,” he said. “As he placed great importance on reading, research and learning, we want a place where people can gather to study, learn all manner of arts, and remember him.”

“It has to be here in Ankara, where he spent most of his life,” he continued, “We want the foundation to be close to the city center so that everyone can come, visit and join the studies there.”

Evlice said they had to postpone this plan due to the novel coronavirus pandemic and that they would like to start and hasten procedures once things get back to normal as there are mounting requests and expectations.

Surprisingly, Evlice noted that at least two new books of Pakdil were soon to be published. One of them, which Evlice is working on, will consist of the works that Pakdil wrote but never had published, while the other will be a collection of letters that Pakdil sent and received in the last 70 years of his life.

”I’ve brought together all the letters that were written to him. The letters until his last days. It’s not yet been published, but it’s in our plans for the coming days.”

Maia Dvalishvili, another close acquaintance of Pakdil, told Anadolu Agency about the poet’s final years. Originally from Georgia, Dvalishvili said Pakdil gave her the Turkish name Ayse, as which she later became known.

“I was with him for the last four years of his life. We lived together, we went everywhere together. Thanks to him, I’ve seen all parts, all beauties of Turkey,” Dvalishvili said.

Like Evlice, Dvalishvili, too, mentioned the importance that Pakdil placed on education and learning.

“He was both a teacher and a father figure for the youth,” she said. “He always advised the youth to learn foreign languages, to study abroad. But he said ‘You shouldn’t stay abroad after your studies. This [Turkey] is your home, you should return here.'”

She said Pakdil was a very sensitive and emotional man, although it was sometimes difficult to deal with his temper that came with his old age.

“I miss him so much,” Dvalishvili said, “If I had a choice to bring him back, I’d do that to spend one more day with him.”

Melike Aydin, Pakdil’s assistant and one of his closest acquaintances, also had emotional moments as she remembered him.

“I met Pakdil on Oct. 12, 2018, and we said farewell in October again. This is very saddening for me. I wish to have spent more time with him,” Aydin said.

Pakdil was like family, a father to everyone around him, she remembered. “He was one of the most true-hearted people that one can know. I’ve never known anyone like him, he was unique in the world.”

“He spent his last six months in hospitals. I wanted to spend more time with him, but it wasn’t our destiny.”

Muslim Tory MP in UK says she was sacked as minister...