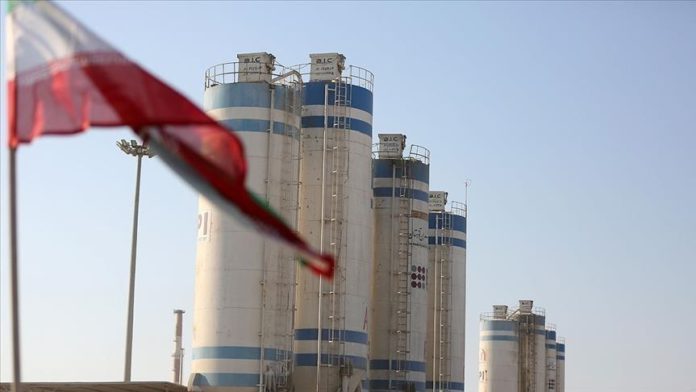 Iran started producing highly advanced uranium silicide fuel for its Tehran research reactor last week amid soaring tensions with the US that is fueled by a deadlock about the 2015 nuclear deal.

The country’s envoy to the UN nuclear agency, Kazem Gharibabadi, said the agency had been “informed” of Iran’s move, which he said is intended to produce high-quality radiopharmaceuticals.

It instantly drew criticism from the US and three European powers engaged in marathon talks with Iran in Vienna to salvage the nuclear deal that Washington abandoned in May 2018.

They warned that it would complicate or even torpedo ongoing talks, which have been effectively put on the back burner after six rounds lasting three months.

While the UK, France and Germany expressed “grave concern” about the measure, the US termed it an “unfortunate step backwards,” but emphasized that the window for diplomacy remains open.

Iran dismissed the concerns, asserting that the move was “peaceful” and for “scientific purpose” while urging the US to take “tough decisions” on reviving the Joint Comprehensive Plan of Action (JCPOA), also known as the Iran nuclear deal.

Washington and Tehran, having shown early willingness to resolve disputes diplomatically to revive the JCPOA, have so far failed to reach a consensus.

Amid the simmering deadlock, both sides continue to up the ante.

The Biden administration has refused to ease a maximum pressure campaign, and in turn, Iran has announced a slew of measures to scale back its commitments under the 2015 accord.

There have been reports recently of Iran restricting the access of International Atomic Energy Agency (IAEA) inspectors to some key nuclear sites, after the technical cooperation agreement with the UN nuclear watchdog ended late last month.

Under the three-month agreement, extended by one more month in May, it was agreed that data from Iran’s nuclear facilities will be stored in a black box, and handed to the IAEA after ongoing talks in Vienna culminate successfully.

But with talks so far failing to produce the desired results, cooperation between Iran and the IAEA has been severely hampered and Tehran has taken new steps to climb down the ladder of the JCPOA after the earlier measure of ramping up uranium enrichment up to 60% purity.

The decision to not extend the “technical cooperation” with the IAEA followed by the unprecedented move to produce advanced nuclear fuel came after the sixth round of talks between Iran and other JCPOA signatories in the Austrian capital.

At the end of the sixth round last month, Iran and other parties said the deal was “within the reach,” while underscoring the need for taking “hard decisions” on contentious issues to break the deadlock.

Apart from an unconditional return to the deal, lifting sanctions and its subsequent verification, Iran also sought guarantees that the US will never again unilaterally leave the deal, which reportedly has not been assured by the incumbent US administration.

The next round of talks has been indefinitely deferred due to key disagreements, as well as the transition of power in Tehran, with conservative heavyweight Ebrahim Raeisi set to take over from reformist Hassan Rouhani, who rose to power eight years ago on the promise of lifting sanctions.

It is widely believed that the new administration’s approach to negotiations with the US and the Europeans would be different, although the new president is unlikely to stop the engagement.

Ali Ahmadi, a strategic affairs analyst with a focus on US-Iran relations, believes there is a “delicate consensus” in Iran in favor of the deal, which Raeisi is “unlikely to attempt to disrupt.”

But, as Ahmadi told Anadolu Agency, “It’s possible that he would want to take a tougher line on some of the details to separate himself from the previous administration.”

He hastened to add that there are still “real differences” between the two sides but they have managed to move past the “most important issues.”

Pertinently, on the campaign trail, Raeisi stressed that he was not opposed to JCPOA talks, but said talks must not be allowed to drag on. “The nuclear deal, despite its shortcomings, is a national document,” he said in a televised debate.

At his first news conference after winning the election, the top conservative figure said negotiations must not be “for the sake of negotiations,” calling for “result-oriented” talks while urging the US to return to the deal “without delay.” He also said “no” to meeting his US counterpart.

According to Javad Heirannia, a senior journalist and analyst, Raeisi’s position on the nuclear deal has changed due to the deteriorating economic situation in Iran.

“The situation is so complicated that its continuation for a few more months could have serious consequences for the government,” he told Anadolu Agency. “Raeisi knows that to get out of this situation, JCPOA must be revived and sanctions must be lifted.”

The revival of JCPOA, he noted, will also facilitate Iran’s “stronger ties” with two of its important regional allies: China and Russia.

While there is vagueness about if and when the deal will be revived, Mani Mehrabi, a political analyst at a Tehran-based think tank, said the deal is most likely to be clinched in the next government.

Talking to Anadolu Agency, Mehrabi said US pressure “might not work” on the Raeisi administration, which has adopted “looking to the East policy” and pledged to “de-link economy from the pressure of US sanctions.”

The most significant sign yet of the JCPOA baton passing to the new administration is the formation of a high-level committee by Iran’s top security body, Supreme National Security Council (SNSC), with the approval of Supreme Leader Sayyid Ali Hosseini Khamenei, to review the text of agreements reached in the Vienna talks.

The seven-member committee formed last month has been tasked with reviewing the negotiations held so far to see if they are compatible with the parliamentary law to “protect nuclear achievements” and the policy of “verification first,” according to reliable sources.

There are also reports that the nuclear file has been transferred to the SNSC from the foreign ministry, as the newly constituted committee weighs its options.

What is likely to make the road ahead bumpy, as Heirannia pointed out, is the fact that the US seeks to expand the scope of JCPOA negotiations to Iran’s regional issues and ballistic missiles.

Tehran has repeatedly termed them “non-negotiable,” and Raeisi’s stance is likely to be more uncompromising on these issues than his predecessor.

OPINION – White violence not a historical truth: it’s a reality...