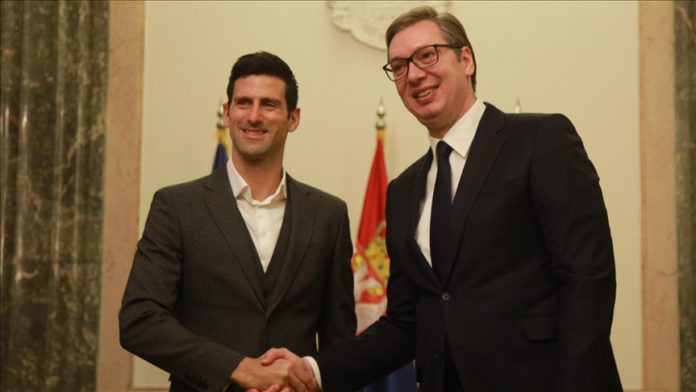 Serbian President on Thursday said that Novak Djokovic, the top men’s tennis player, did his best to participate in the Australian Open tennis tournament.

Djokovic, on Jan. 17, returned to Serbia after being deported from Australia.

On Jan. 4, he was given a medical exemption from being vaccinated for the coronavirus by Australian authorities to travel to the country to defend his Australian Open title and chase a record 21st Grand Slam win.

“Djokovic’s struggle to participate in the Australian Open Tennis Tournament was admirable. I thank Djokovic for glorifying his country and representing the Serbian people very well,” said Djokovic.

Vucic added that Djokovic has been in contact with him since the moment his Australian visa was revoked.

“Even though I told Novak ‘come back, Serbia is waiting for you,’ he did not come back and proved once again that he did the sport for our country,” said Vucic.

For his part, Djokovic said that he felt the support of the Serbian people and the people from the region.

Djokovic was detained by immigration authorities when he arrived in Melbourne on Jan. 6.

He filed an appeal against the move and court-ordered his release on Jan. 10, but the Serbian athlete was detained again on Saturday after Australia’s Immigration Minister Alex Hawke used discretionary powers to cancel his visa.

Later, he was banned from entering Australia for three years after three Federal Court judges upheld his visa cancellation.

However, Australian Prime Minister Scott Morrison said that Djokovic could be allowed to enter the country sooner under appropriate conditions.

While the ban is for three years, there is the possibility of him returning in the right circumstances, which would be examined at the time, the prime minister told Australian radio station Channel Nine.

Australia mandates all players be fully vaccinated against the coronavirus to compete in the year’s first major tennis tournament.

So, Nadal became the most decorated Grand Slam champion after his 21st Grand Slam title, surpassing his rivals Novak Djokovic and Roger Federer, who have claimed 20 major championships each.