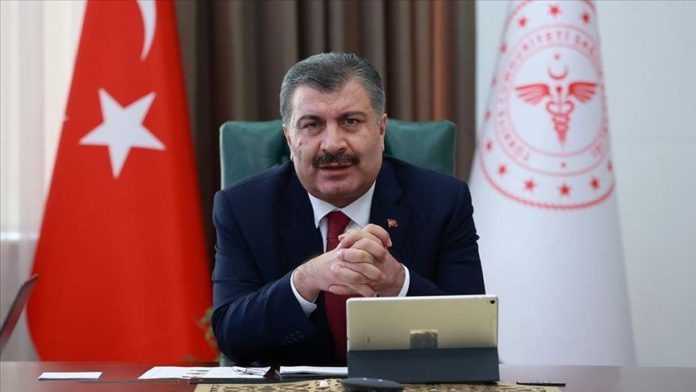 Since most who test positive for the novel coronavirus in Turkey do not show symptoms, “not all cases are patients,” the country’s top health official said Wednesday.

Explaining that all those who test positive for the virus are listed as “cases,” Health Minister Fahrettin Koca said the vast majority infections were asymptomatic.

“The rest are those who show symptoms of the disease and are brought under treatment,” said Koca, adding that these patients are either monitored in hospitals or their homes.

“We report those that we treat in hospitals separately as inpatients,” he added.

Amid swelling case numbers across Europe, Koca noted that around 33 million people have been infected with COVID-19 worldwide and that more than 1 million have died as the World Health Organization has estimated that the virus could cause about 2 million fatalities.

Stating that the data on global coronavirus tables, which he also shared from time to time, were based on countries’ official statements to the World Health Organization, he said the numbers in question comprised of confirmed figures.

Koca was responding to claims by a lawmaker from the main opposition Republican People’s Party (CHP), Murat Emir, who earlier this week shared a document purportedly indicating that the number of positive cases in Turkey was 19 times higher than official figures.

Noting that Emir’s document was undated, Koca said it showed 40,000 more tests than the roughly 112,000 that had been conducted on the day to which it is said to correspond, Sept. 10.

The health minister underlined that officials traced the contacts of all cases without concealing any of those infected.

“I want our citizens to know this: All the figures in the tables we provide are true in their entirety.”

He added that efforts to develop a vaccine had progressed far beyond the trial phase and that procurement initiatives had begun.

“We’ll have a program that takes into account age and chronic disease priority. Countries with whom we are in contact are reporting that they have gotten results from the vaccine.”

Koca noted that domestic vaccine efforts continued and that 13 studies were ongoing. Some of these are to undergo Phase I testing, he said, adding that animal trials were mostly complete.

Turkey reported 1,391 new cases of the novel coronavirus and 1,245 recoveries on Wednesday. The country’s overall case count now stands at 318,663 with recoveries totaling 279,749, according to Health Ministry data.

Nearly 112,098 coronavirus tests were conducted over the past 24 hours, bringing the overall tally to over 10.38 million.

The death toll from the virus reached 8,195, with 65 more fatalities as of Wednesday.