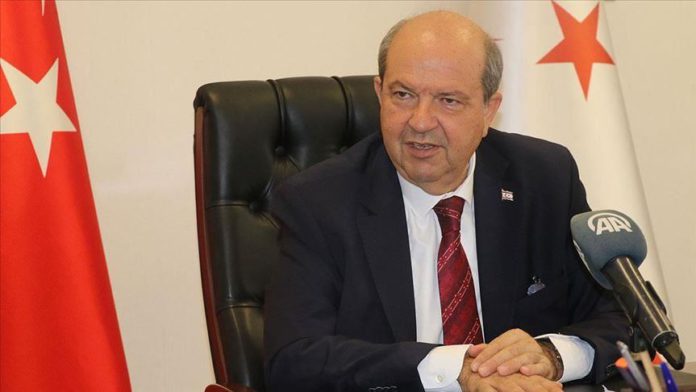 The Turkish Republic of Northern Cyprus (TRNC) acts in accordance with Turkey in defending its rights in the Eastern Mediterranean, the country’s prime minister said on Thursday.

“The philosophy of the TRNC is to act in line with Turkey 100% in defending our rights in the eastern Mediterranean,” Ersin Tatar told Anadolu Agency.

Tatar added that the TRNC and Turkey are seeking their rights in the Eastern Mediterranean but will not tolerate unfairness in the region.

“As the TRNC, we have a voice in the Blue Homeland, and we are in cooperation with Turkey to defend our rights and interests,” Tatar said.

He added that Turkey resolutely continues its activities with its armed forces and navy in the region.

On the deal signed between Greece and Egypt, he said it violated the rights and interests of the TRNC and Turkey.

As part of the country’s hydrocarbon surveying activities, Turkey issued a NAVTEX (navigational telex) on Aug. 10, 2020, announcing that the Oruc Reis vessel would begin conducting fresh seismic research in the Eastern Mediterranean.

Turkey’s decision came following a controversial delimitation deal signed between Greece and Egypt, only a day after Turkey said it would postpone its activities in the region as a sign of goodwill after dialogue efforts from Germany.

But after declaring the deal “null and void,” Turkey authorized the Oruc Reis to continue its activities in an area that is within Turkey’s continental shelf.

On reopening the abandoned town of Maras after decades in the Turkish Cypriot city of Gazimagusa, Tatar said they do not want to contradict international law.

“Our idea to reopen Maras is on condition of handing back the goods and properties to their former residents,” he said, adding that this will not contradict with the UN.

Underlining that it is difficult to give an exact time for the reopening which has technical and legal aspects, Tatar said there is no point in delaying it.

On his visit to Turkey last week, Tatar said he held fruitful meetings which addressed a range of issues.

Maras, located in northern Cyprus, was a ghost town where entry was forbidden except for Turkish army personnel stationed in the TRNC.

It was abandoned after the UN Security Council passed Resolution 550 on May 11, 1984 which said the town can only be resettled by its original inhabitants.

The TRNC on June 18, 2019 announced the opening of Maras to tourists.

Stressing that Turkey made an important contribution to TRNC in the fight against the novel coronavirus, Tatar said the pandemic is under control in the country.

“During my recent visit, Turkey decided to build a 100-bed hospital in TRNC. Hopefully, its foundation will be laid next week,” Tatar said, thanking Turkish President Recep Tayyip Erdogan and the government.

He underlined that building such a pandemic hospital will strengthen the health infrastructure of the country.

Since originating in China last December, the virus has claimed nearly 750,000 lives in 188 countries and regions, according to the latest figures of the US-based Johns Hopkins University.

More than 20.63 million cases have been reported worldwide, while over 12.84 million patients have recovered so far.

Number of people in Turkey with diabetes rising: expert