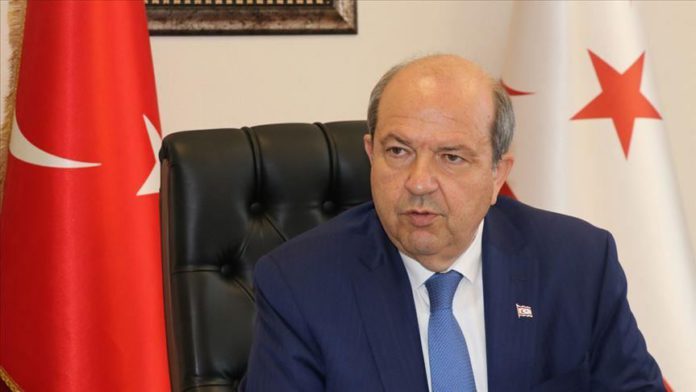 The Turkish Cypriot premier on Monday condemned France over its military support to the Greek Cypriot administration.

“I condemn France for its military support to the Greek Cypriot administration in the current circumstances, and urge it to review its attitude as soon as possible,” said Ersin Tatar in a statement, highlighting that the French support only serves to escalate tension in the region.

On Saturday, it was announced that a 2017 defense cooperation agreement between Southern Cyprus and France had entered into force on Aug. 1.

Noting that the Republic of Cyprus, in which the Turkish Cypriots were an equal partner, was split by the expulsion of the Turks as a result of the armed attacks of the Greek Cypriots on Dec. 21, 1963, Tatar said: “The state in Southern Cyprus is a Greek state.

“So, it remains a serious shame in terms of international law that Southern Cyprus continues to sign agreements as if the Republic of Cyprus, of which we were a partner, still exists.”

He underlined that the deal under the shadow of heightened tensions was a dangerous step because it was against the 1960 treaties.

“France is a member of the UN Security Council and it has an essential duty of establishing and/or continuing peace,” Tatar said, adding that the deal causes further delay in resolving the issue.

Pointing out that the Turkish Republic of Northern Cyprus and Turkey are determined to protect their rights in the Eastern Mediterranean, Tatar stressed that they would not bow to the attitude that disregards the sovereignty and security of Turkish Cypriots.

According to the Greek media on Aug. 11, French Air Forces’ two warplanes and a transport aircraft landed in Andreas Papandreou Air Base in the coastal city of Baf in the island as part of the deal inked by Southern Cyprus and France.