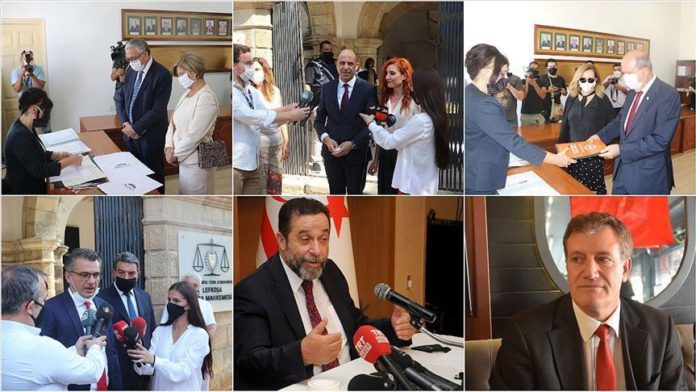 A total of six candidates will compete in the presidential election on Oct. 11 in the Turkish Republic of Northern Cyprus (TRNC).

The roadmaps presented by the candidates to solve the Cyprus issue will be decisive in the results of the elections.

Presidential election, initially scheduled for April 26, was postponed to Oct. 11 due to the measures against the novel coronavirus.

After Democrat Party’s Lefkosa deputy Serdar Denktas announced on July 30 that he would run as an independent candidate, the number of candidates rose to six.

On Sept. 4, all candidates made formal applications to the Supreme Electoral Council.

Alpan Uz, Mustafa Ulas, and Arif Salih Kirdag independently applied to the council, while Fuat Ciner applied as a candidate for the Nationalist Democracy Party.

Although the electoral process began before the pandemic, the campaigns were halted as the election was postponed due to the first COVID-19 case reported on March 10.

The candidates have recently focused on field campaigns as the election is only in a few days.

The Supreme Electoral Council restricted the number of people participating in election campaign meetings, and announced that participants must comply with social distancing measures and wear masks.

The council also took measures against the virus for polling clerks and voters on the election day, announcing that those measures for public health are compulsory to comply with.

Candidates can cancel mass gatherings due to the risks COVID-19 pose.

During the election process, candidates addressed several issues, including views on the solution of the Cyprus issue, reopening of the abandoned town of Maras, and developments in the Eastern Mediterranean.

Akinci and Erhurman from the left-wing support that the right choice to solve the Cyprus issue is a “federation” model — based on sharing administration and wealth — negotiated for more than 50 years with no results.

Tatar and Arikli, mostly appealing to right-wing voters, argue the model in question is now obsolete. They support options such as “a two-state solution based on sovereign equality” or “confederation”.

While Ozersay believes the “two-state” model will be the most realistic solution, Denktas thinks the people’s desire for a solution will not be captive only to a federal solution model.

In 2015 presidential election, negotiations mostly focused on a “federation” model to resolve the issue. In this election process, different models, including a “two-state solution”, are also expressed.

A total of seven candidates, with five of them independent, competed in 2015 election, and a second ballot was held. Akinci won 60% of the votes and elected president.

The Turkish Cypriots will go to the polls for the 10th time since 1974 to elect a president.

In 1974, following a coup aiming at Cyprus’ annexation to Greece, Ankara had to intervene as a guarantor power. In 1983, the TRNC was founded.

For decades, there were talks to resolve the dispute, all which ended with failure. The latest, held with the participation of the guarantor countries – Turkey, Greece, and the UK – ended in 2017 in Switzerland.