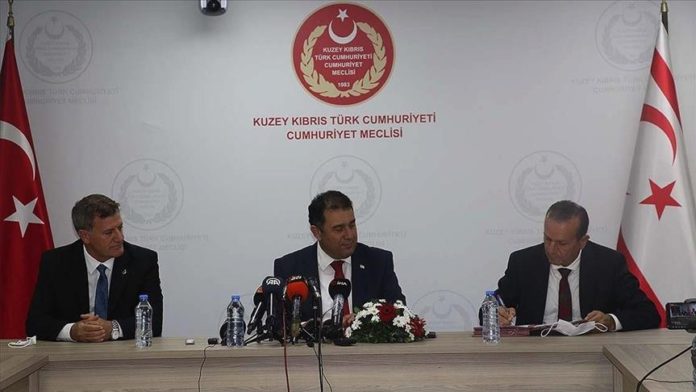 Three political parties in the Turkish Republic of Northern Cyprus (TRNC) signed a protocol Tuesday after reaching an agreement to form a coalition government.

The protocol was signed by the National Unity Party (UBP), Democratic Party (DP) and Rebirth Party (YDP) at the TRNC’s Assembly of the Republic by UBP Vice Chairperson Ersan Saner, DP Chairperson Fikri Ataoglu and YDP Chairperson Erhan Arikli in the presence of representatives of all three parties.

Saner said in a statement that they reached an agreement with the DP and YDP after he was assigned to form the government by President Ersin Tatar on Monday.

“Although our country is in very good condition compared to other countries in terms of the COVID-19 pandemic, it is a fact that we have financial problems. It is also a reality that there is a governmental vacuum,” Saner said. “Our only aim here is to serve the public of the TRNC in the best way.”

“We have always said that we were ready to shoulder responsibility,” said Ataoglu, while noting the importance of contributions by other parties.

“We call on the opposition to save the country from the current bottleneck through cooperation by reaching a mutual understanding and ensuring a national consensus at the assembly,” said Arikli.

The new cabinet list is expected to be presented to the president shortly.

Millions at risk in northern Ethiopia as hunger bites