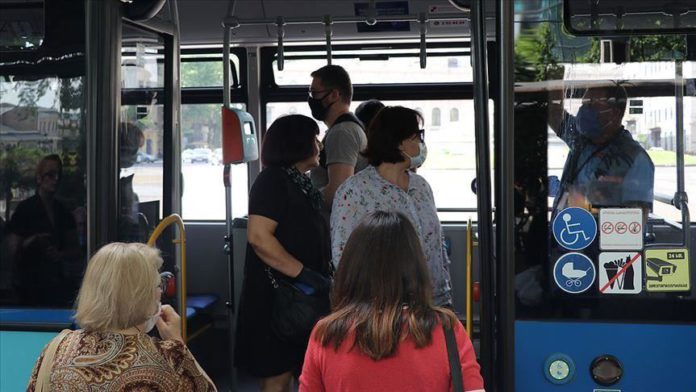 Dozens of new fatalities and coronavirus cases were reported in several Eurasian and Central Asian countries on Tuesday.

More than 42,000 coronavirus tests have been carried out in the past day, Stepanov said.

A total of 63,546 patients have recovered so far, including 940 new recoveries since Monday, he added.

The minister underlined that the number of patients receiving treatment in hospitals climbed to more than twice compared to July, approaching 8,000 people.

The quarantine regime was extended until Nov. 1 in Ukraine.

In Uzbekistan, 110 more people tested positive for COVID-19, raising the overall count to 44,107.

The Central Asian country registered four new fatalities, bringing the death toll to 356, according to a statement by the Health Ministry.

The ministry said the number of recoveries rose by 63 to 41,594, so 94% of the patients in the country recovered from the pandemic.

With nearly 100,000 people under surveillance in the country, 2,157 COVID-19 patients are treated in hospitals.

The country reported one more fatality, bringing the death toll to 1,061, according to the Health Ministry data.

A total of 551 patients are being treated in hospitals, while 2,627 are under treatment at their homes.

The infections in Kazakhstan rose by 64 to 106,425, said the Health Ministry.

The number of recoveries climbed to 99,893, as 239 patients were discharged from hospitals.

The treatment of 4,892 COVID-19 patients, including 33 children, continues in the country, while 142 people are in severe condition, and 16 in critical.

A total of 1,634 people have died in Kazakhstan so far due to pandemic.

In Georgia, 45 new virus cases over the past 24 hours raised the total number of cases to 1,770, according to a written statement by the prime minister’s office.

The number of people who recovered after catching the virus increased by six, reaching 1,321.

Tbilisi Infectious Diseases Hospital Director Marina Ezugbaia said that as many as 45 infections were recorded within the last 24 hours — the highest number of daily cases ever seen in the country.

Georgia saw 19 fatalities due to the virus, with 5,882 people in quarantine, and 390 under surveillance in hospitals.

According to the Health Ministry, three more fatalities over the past 24 hours pushed the death toll up to 903, while recoveries rose to 40,592.

A total of 3,182 patients are receiving treatment in the country.

Over 27.38 million cases have been reported in 188 countries and regions since the virus emerged in China last December.

The US, India, Brazil, Russia, and Peru are currently the hardest-hit countries in the world.

The pandemic has claimed over 893,600 lives worldwide, while recoveries exceeded 18.37 million, according to figures compiled by the US’ Johns Hopkins University.