TurkishPress
Home News 'No peace until Kashmiris' rights are fulfilled' 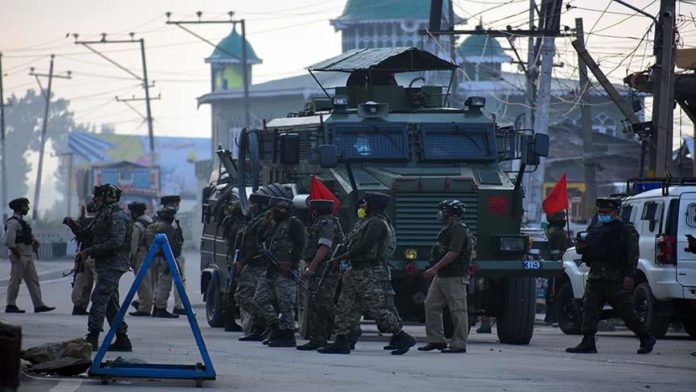 Peace that is not based on the principle that governments derive all their just power from the governed can never – and should never – last, speakers said at a webinar on the Kashmir issue on Friday.

“According to the additional protocols of the Geneva Conventions, which relate to people fighting colonial domination, alien occupation, and racist regimes for their right to self-determination, Kashmir is an international armed conflict,” said Mohammad Mushtaq Ahmad, director general of the Pakistan-based Shari’ah Academy.

Former Pakistani diplomat Ashraf Qazi stressed that there was “no zero-sum solution” to the Kashmir conflict.

“There has to be a settlement that is acceptable to all,” he said, referring to the people of Kashmir, and the governments of Pakistan and India, who both hold parts of the disputed Himalayan region but claim it in full.

He urged Islamabad to raise the Kashmir issue and “India’s genocide of Kashmiris” at every possible international forum.

“Islamabad’s policy should be to seek a peaceful solution but not if that approach is rebuffed by India. […] If India continues its genocidal actions in Kashmir, then Pakistan has every right to deem it a threat to its own existence and nothing less than a war,” Qazi said.

“In that case, Pakistan should tell the world that it will do anything to stop the genocide in Kashmir.”

Dr. Ghulam Nabi, a Kashmiri diaspora leader in Washington, emphasized that it was imperative to keep up dialogue and discussions on Kashmir “even though nothing has changed on ground.”

“If we stop talking about Kashmir … India will think its exertion of military might has settled the Kashmir issue,” he said.

He cautioned that any solution “without Kashmiris on board” will be a win for India.

“We often hear of these so-called win-win solutions; what is that all about? Kashmiris are not asking for autonomy or self-rule – their struggle is legitimate and supported by UN resolutions,” he asserted.

Nabi also spoke of the reasons why the Kashmiri diaspora’s efforts in the US had failed to generate any results.

“There are two reasons; the US has commercial contracts with India worth some $110 billion and it is using India as shield against China,” he said.

Ali Nawaz Chowhan, a Pakistani judge who has served at The Hague and as former chief justice of the Gambia, said India’s “war crimes in Kashmir” will never stop unless top UN officials take action.

“What is being done to people of a particular faith in Kashmir by Indian forces is nothing less than a holocaust … the magnitude of wrongs being committed by India [in Kashmir] is no less,” he said.

Nasir Qadri, director of the LFOVK, said the Kashmir dispute is a source of “international armed conflict between India and Pakistan.”

“India and Pakistan have fought three major wars over Kashmir; this is not an internal issue but an international armed conflict where two states are directly involved,” he said.

“The fact is India has forcibly placed more than 700,000 troops in Kashmir for the past 72 years, while completely disregarding Kashmiris’ right to self-determination as supported by UN resolutions … this is a case of a prolonged military occupation,” he said.