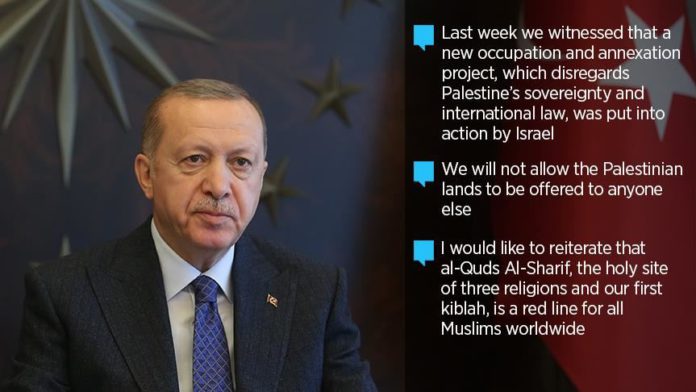 Turkey’s president on Sunday reiterated his country’s support for Palestine as the Muslim world celebrates Eid al-Fitr, the holiday marking the end of the holy month of Ramadan.

“I congratulate my American Muslim brothers and sisters’ Eid al-Fitr on behalf of the citizens of the Republic of Turkey.” pic.twitter.com/WvwGq53P79

“We will not allow the Palestinian lands to be offered to anyone else,” Recep Tayyip Erdogan said in a video message on Twitter addressed to US Muslims.

“I would like to reiterate that al-Quds Al-Sharif, the holy site of three religions and our first kiblah, is a red line for all Muslims worldwide,” Erdogan said, referring to the Al-Aqsa Mosque in Jerusalem, also known by Jews as the Temple Mount, and home to the Christian Church of the Holy Sepulchre.

“It is clear that the global order has long failed to produce justice, peace, serenity, and order,” he said.

“Last week we witnessed that a new occupation and annexation project, which disregards Palestine’s sovereignty and international law, was put into action by Israel,” he added.

Israel has said it will annex parts of the West Bank on July 1, as agreed to between Prime Minister Benjamin Netanyahu and Benny Gantz, the head of the Blue and White party.

The plan has drawn outrage worldwide, and especially sharp condemnation in Turkey.

Erdogan hails Eid for US Muslims

Turning to the holiday, Erdogan said: “I congratulate my American Muslim brothers and sisters’ Eid al-Fitr on behalf of the citizens of the Republic of Turkey.”

“I pray to my Lord that these holy days may herald an era of peace, safety, and serenity for American Muslims, the entire Islamic world, and humankind,” Erdogan said.

“The [coronavirus] pandemic has shown that there are no hierarchies or privileges among any region, nation, or country in the world,” he added.

“It is only through global cooperation that the problems caused by diseases, various conflicts, wars, migration, racism, Islamophobia, terrorism, and poverty that threaten humankind can be overcome,” Erdogan said.

“Turkey has endeavored to respond to all countries, including the United States, who asked for our support in the fight against the global pandemic,” he said, referring to the medical and aid supplies for the pandemic that Turkey sent to scores of countries worldwide.

“I wish Allah’s grace upon our brothers and sisters who lost their lives because of Covid-19, patience to their families, and a speedy recovery to those receiving treatment,” he added.

“Undoubtedly, the prayers we say in this climate are more candid and sincere than ever,

“Our hearts are one and united even though we have spent the month of Ramadan and Eid al-Fitr bitterly,” he said.

On the ongoing civil war in Syria, the Turkish president said: “As everyone is focused on the pandemic, the oppressed Syrian people continue to suffer.”

Since 2011, Syria’s civil war has killed hundreds of thousands of people and displaced more than 10 million, according to UN estimates.

On the conflict in Libya, he said: “The putschist [Khalifa] Haftar forces continue to attack their own people and destabilize the country and the region.”

The Libyan government, also known as the Government of National Accord (GNA), has been under attack by warlord Haftar’s armed forces since April 2019, with more than 1,000 killed in the violence.

“Blood and tears have, unfortunately, continued to be shed in the holy month of Ramadan as well across the Islamic world,” he added.

“The Covid-19 pandemic has again called into question the utility and reliability of international organizations against global threats,” he said.

“We hereby reiterate our call for fairly redesigning the global system, which we describe as ‘the world is bigger than five’,” he said, reiterating his motto on reforms to the UN Security Council, a cause he had long championed.