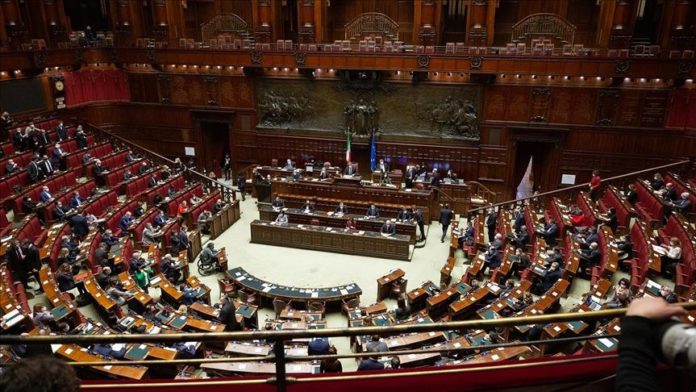 Italy’s Parliament looked unlikely Friday to break a five-day stalemate over the election of a new president as political parties remained at odds over the crucial decision.

The center-right bloc was set to vote for Senate speaker Maria Elisabetta Alberti Casellati, but they do not have a majority and center-left parties oppose the choice.

Casellati, 75, earned a reputation as a staunch loyalist of former premier Silvio Berlusconi when she defended him from accusations of soliciting sex from an underage prostitute in the “bunga bunga” affair, from which he was eventually acquitted.

“I have known Elisabetta Casellati for more than 30 years and I can guarantee she would be absolutely fit,” Berlusconi wrote on Facebook.

If elected, Casellati would be Italy’s first female president. The gambit would succeed if some center-left or independent lawmakers broke ranks and joined the center-right in supporting her, but it looks like a long shot.

The election is decided by 1,009 national and regional lawmakers, and the winning candidate needs a 505 majority. The center-right controls around 450 votes, the center-left a similar number, while the remaining lawmakers are unaffiliated or belong to smaller groups.

In a sign of growing bad blood between the two main camps, Democratic Party leader Enrico Letta accused the center-right of trying to sow divisions, rather than work toward a consensus candidate.

“I want to express profound disappointment for this method. We trusted them until now, I hope we did not make a mistake,” he said.

Antonio Tajani, the deputy leader of Berlusconi’s conservative Forza Italia party, shot back: “We only got vetoes from the left, which however never makes proposals.”

Former premier Matteo Renzi, a centrist, predicted the Casellati gamble would fail, forcing negotiations back toward a bipartisan deal. He called on the center-right to stop castings for unlikely presidential candidates.

Cross-party negotiations could intensify as Parliament decided Friday to move from one to two presidential votes per day. The first was scheduled for 11 am (1000GMT) and the second for 5 pm.

Prime Minister Mario Draghi and ex-parliamentary speaker Pier Ferdinando Casini have been tipped as top bipartisan candidates for the presidency. The re-election of outgoing President Sergio Mattarella is another option, though he has said he wants to retire.

Draghi, the ex-president of the European Central Bank, is highly-respected internationally, but there are concerns that moving him from his job would make it difficult to create a new government, possibly triggering early elections that most parties do not want.