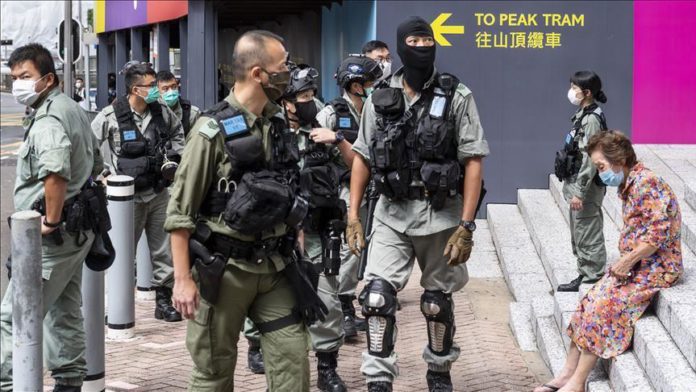 China on Tuesday asked the UK to “abandon the illusion of continuing its colonial influence” in Hong Kong after Britain suspended its extradition treaty with the territory over a new security law.

On Monday, the British government suspended an extradition treaty with Hong Kong over a new controversial security law for the semi-autonomous city.

Wenbin urged mutual respect for the “core interests” of China and UK.

“In the face of wrong actions by the UK side, China will strike back forcefully,” he warned.

Earlier, China’s Embassy in London condemned the UK decision to suspend the extradition treaty, saying it had “blatantly interfered in China’s internal affairs.”

In response to the UK move, the Chinese Embassy said the UK has “repeatedly made wrong remarks” on the new security law and that “China will firmly fight back any move that interferes in its internal affairs.”

It argued that the new law will make Hong Kong a “safer, better and more prosperous place.”

“Any attempt to pressurize China and obstruct the implementation of this law will meet the strong opposition of 1.4 billion Chinese people, including Hong Kong compatriots, and such attempt is doomed to failure,” it said.

Canada and Australia have also suspended their extradition treaties with Hong Kong.

British Prime Minister Boris Johnson has already pledged to offer Hong Kong residents with a British overseas passport the chance to settle in the UK, allowing them to ultimately apply for British citizenship.

The local Hong Kong government led by Chief Executive Carrie Lam slammed the UK for “its double standards” after suspending the treaty, decrying its “highly politicized and also blatant interference in the internal affairs of China.”

“Such a move will allow fugitives to avoid law,” said a Hong Kong government spokesman.

“This also means that UK may become the place where criminals will want to flee to.”

UK-China relations are under growing strain from issues including the coronavirus pandemic, widespread abuses of the Uighur community, the treatment of Hong Kong, and the UK excluding tech giant Huawei from its 5G infrastructure.

ANALYSIS – What is it that Ethiopia and Egypt are exactly...

Italy cracks down on citizens amid lockdown

Morales: US aid to Bolivia in 2020 proves role in coup