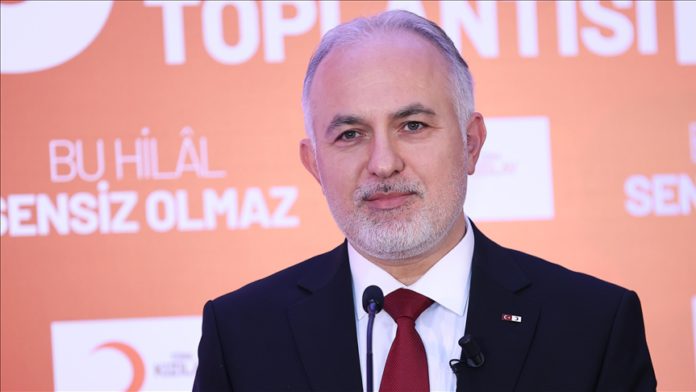 Ten years since the beginning of the brutal civil war in Syria, the head of a major Turkish aid group said no lasting end to the country’s humanitarian suffering is in sight, but his group and the Turkish government are still doing some good.

“For the current situation, actually, there is no light at the end of the tunnel. But we have still opportunities,” Kerem Kinik, head of the Turkish Red Crescent or Kizilay, told Anadolu Agency, as this Monday marks the 10th anniversary of the civil war in neighboring Syria.

“For example, this month, there will be a Syria conference,” said Kinik, who is also vice president of the International Federation of Red Cross and Red Crescent Societies (IFRC).

“If the international community, if the superpowers, if the institutions make a strong commitment to conflict resolution and peace-building and resolution of this crisis, and if [they] set up a strong mechanism for protecting the human rights of refugees or IDPs [internally displaced persons] … I believe this will create a positive atmosphere among refugees,” he said.

“But,” he added, “I have to say that unfortunately, there is no proper mechanism for providing this kind of atmosphere or environment for refugees.”

According to Kinik, as March 15 marks a full decade of the Syrian crisis, “this is another signal for all mankind that this is the New World Order.”

“And there is no punishment or formulation [for a solution]. There is no intervention in the crisis. There is no proper mechanism for preventive measures for the crisis. And this is not good for the future of the world,” he explained.

Syria has been in a civil war since early 2011, since the Bashar al-Assad regime cracked down on pro-democracy protests with unexpected ferocity.

Hundreds of thousands of people have been killed and more than 10 million others displaced over the last decade, according to UN officials.

Noting that during the war almost half of Syria’s total population left their homes and one out of four left Syria, Kinik said: “Over one million babies were born as a refugee babies outside of their home country.”

Kinik added that they are working as monitoring agencies, from the United Nations to the Red Cross and Red Crescent societies and to NGOs, to hold back the tide of human suffering.

On the nearly 4 million Syrians living in neighboring Turkey – more than any other country in the world – Kinik said: “Since the beginning of the crisis, Turkey, applied an open-door policy to save lives. And Turkey saved millions.”

He noted that Jordan and Lebanon followed the same policy, and in these three countries a total of almost 5.5 million Syrians sought shelter.

On Turkey’s special legislation, the Temporary Protection Law for Syrians, Kinik said: “Through this framework, almost half a million newborn babies live in a safer environment with their basic rights, and they’re receiving assistance from the government and from Kizilay regularly.”

“Inside Syria, more than 2 million people have no access to school, but in Turkey, 80% of the Syrian refugees are able to access school, and in collaboration with European ECHO [the EU’s European Civil Protection and Humanitarian Aid Operations] and UNICEF, we’re providing scholarships for 700,000 students.

“We’re encouraging their families to send their kids to school, not early marriage or the early labor market. And I have to say that they’re living healthy, safe, and happy in Turkey,” he added.

As around half a million Syrians have voluntarily returned to their country in recent years, Kinik explained how difficult the process can be as “the Syrian crisis is a protracted crisis.”

In most of Syria, he said, “there is no humanitarian law and no respect for the laws of war or other measures protecting human dignity and rights.”

But this is not the case in parts of northern Syria liberated by Turkey from terrorists, he explained, as there is a measure of safety and stability there.

“After some military intervention from the Turkish side, and providing some safe, secure spaces for them, almost half a million migrants returned to their own homes,” Kinik said, referring to Turkey’s cross-border military operations in northern Syria.

Stressing the public safety and authority in these parts of the country, Kinik explained that Kizilay is operating eight hospitals and dozens of medical centers there in collaboration with the Turkish Health Ministry.

“We have 3,000 medical staff working there,” he added. “The Turkish Maarif Foundation and Turkish government provide financial support to the cost of running the schools there.”

“So this atmosphere convinces people to get back to their homes, and we’re encouraging people who are living in Turkey to voluntarily take up the process to return,” he explained.