TurkishPress
Home News Nigeria: IGP warns not to use force against protesters 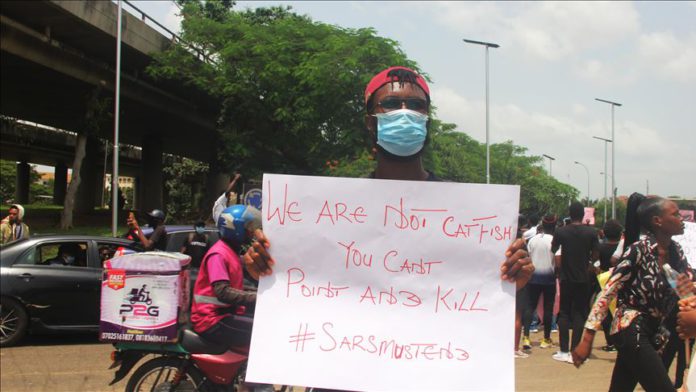 Nigeria’s Inspector General of Police (IGP) Mohammed Adamu warned police officers Thursday not to use force against peaceful protesters as nationwide protests continued despite the disbanding of the controversial Special Anti-Robbery Squad (SARS).

“The IGP has warned Police Officers and their commanders against the use of force on peaceful protestors,” the Nigeria Police Force (NPF) tweeted.

“He reiterates that citizens have fundamental rights of freedoms of expression, assembly and movement and these must always be upheld and protected by the police,” it said.

It added that Adamu “appealed to protestors to continually conduct themselves peacefully and guide their ranks against infiltration by criminal elements.”

On Wednesday, a local activist said that thugs had attacked protestors in the capital Abuja.

“We should never assign tribe or religion to thugs. What we should assign to them is thuggery,” Aisha Yesufu said on Twitter.

“The IGP stresses that the Force leadership has heard the voice of people clearly and is irrevocably committed to doing everything possible to address the observed ills, punish the offending officers and enthrone a people-friendly police force,” the NPF said.

Governors of the country’s 36 states on Wednesday called on Adamu to put on hold the creation of a Special Weapons and Tactics (SWAT) team to replace SARS and to conduct wider consultation with Nigerians, local media reported Thursday.

“The [Nigeria Governors’] Forum acknowledged the concerns of many Nigerians, especially youths that have been affected by the excesses of some officials of the Federal Special Anti-Robbery Squad (FSARS) and the Nigeria Police,” a communique issued by the governors after a meeting with the IGP said, according to The Guardian news website.

“On the IGP’s plan to create SWAT, governors stated that even though the effort might be necessary and in good faith, they argued that the timing is inauspicious, as the mood of the nation negates it and may understandably be misinterpreted as a surreptitious move to dress FSARS in another garb,” the Nigerian governors added.

Demonstrations had been taking place for several days against the unit with protesters besieging its headquarters.

They chanted “End SARS” and poured red paint on the street in front of the building – a symbolic reference to the killings they say that SARS officers have committed against people. SARS also is reportedly accused of torture and human rights abuses.