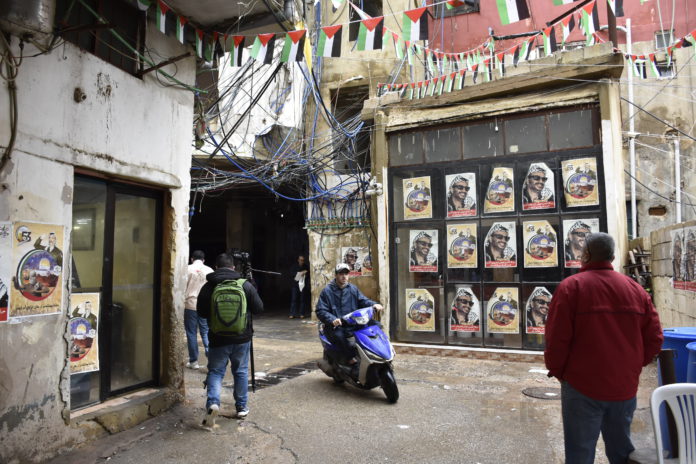 Two years after the UN aid agency for Palestinian refugees lost its biggest donor country, many civil society groups around the world are trying to at least partially meet the needs of hundreds of thousands of residents of Lebanese refugee camps.

The financial situation of the United Nations Relief and Works Agency for Palestine Refugees in the Near East (UNRWA) has been increasingly teetering since US President Donald Trump declared in 2018 that Washington would no longer provide nearly a third of the organization’s total budget in a major blow to 5.9 million Palestinian refugees, including 475,000 registered in Lebanon, where they are barred from holding property and employment in certain professions.

Many non-governmental organizations like the Istanbul-based Humanitarian Relief Foundation (IHH) have stepped up efforts to ease the situation of Palestinian refugees in Lebanon’s 12 crumbling camps, which have suffered cutbacks in a multitude of services — from health care to education to food rations.

“In this latest period, there have been US cutbacks. But this is not just the US,” said Huseyin Oruc, the deputy president of the IHH. Oruc told Anadolu Agency that besides the US, other Western nations and Arab countries in the Gulf region had also reduced funding for UNRWA, many with economic concerns at home in mind.

As a result, the body has been unable to meet the basic food needs of the camps’ inhabitants to the degree that it used to, while other public services have also been adversely affected. This is made worse by the fact that UNRWA is the sole provider of such services for Palestinians in Lebanon.

The IHH, along with 21 other Turkish non-governmental organizations, launched a fresh relief campaign this week for Palestinians in Lebanon for whom they hope to conduct 15 projects across various fields.

Besides seeking to provide the camps’ residents with food and clean water, they also plan to electrify and repair homes, provide remote lessons for schoolchildren, prevent drug use and help fight the novel coronavirus by opening additional health clinics and procuring vital medical supplies and equipment.

COVID-19 poses a particular risk for the overcrowded dwellings that Palestinian refugees have to call home as they navigate the camps plagued by unhygienic conditions and decaying infrastructure.

Dr. Mevlit Yurtseven, who heads the Alliance of International Doctors, which is also taking part in the initiative, cautioned that the fight against the virus fell short in the Palestinian camps.

“The pandemic hit the entire world […] but people in low-income groups, countries and societies were the most affected. The situation was already bad for Palestinians in Lebanon,” Yurtseven told Anadolu Agency.

He underlined that though concrete data had not been gathered on the issue, it was likely that due to the economic conditions in the camps, not enough tests were being carried out and that little in terms of treatment was available for those who did test positive.

This was not the only relief effort by Turkish groups for Palestinians living in their northern neighbor.

In one instance earlier this month, another group of Turkish non-governmental organizations opened a clinic and a distance education center in the Burj al-Barajneh camp, which houses a population of roughly 30,000.

In another recent initiative, Turkish charities distributed fuel, food and personal hygiene items to hundreds of families in Burj al-Barajneh as well as the Al-Jalil camp. It had also provided income aid for many families.

According to Ali Hweidi, the general director of Association 302 to Defend Refugees Rights, both local and international non-governmental organizations in Lebanon were “playing a role to keep the Palestinian refugees alive.”

Speaking to Anadolu Agency, Hweidi explained that despite this, the refugees’ needs outstripped these groups’ capabilities.

“We’re talking about 80% of Palestinian refugees living in poverty,” he said, adding that a third suffered from a major illness.

He noted that under these circumstances, an estimated one-third of Palestinians could suffer from the coronavirus if measures are not taken to protect them.

When the US cut its contributions to UNRWA, this cost the organization $360 million per year. According to data by the UN body, this represents more than 45% of the total amount it received in 2020 as of Dec. 9.

While the incoming administration of President-elect Joe Biden and Vice President-elect Kamala Harris has pledged to “take immediate steps to restore economic and humanitarian assistance to the Palestinian people,” this would only be a remedial measure that would do little to resolve the underlying humanitarian problems that come with being a temporary refugee.

Short of returning to their ancestral lands in Palestine after 72 years in exile, a possible solution for refugees living in these camps, according to Oruc, would be integration into the societies where they are currently located, paving the way for them to freely earn a living, enjoy equal rights and possibly gain citizenship.

“[Refugees] have been waiting in Lebanon for 72 years now. For how many generations, there’s still no solution in sight […] People shouldn’t be left in limbo like this.”

“What host countries need to do here is to ensure that integration takes place and prepare the related groundwork. This could be citizenship or a way to share equal rights,” Oruc said.

In the meantime, non-governmental organizations can only meet refugees’ immediate needs and give voice to their greater ones, he said. “The rest is up to the states.”