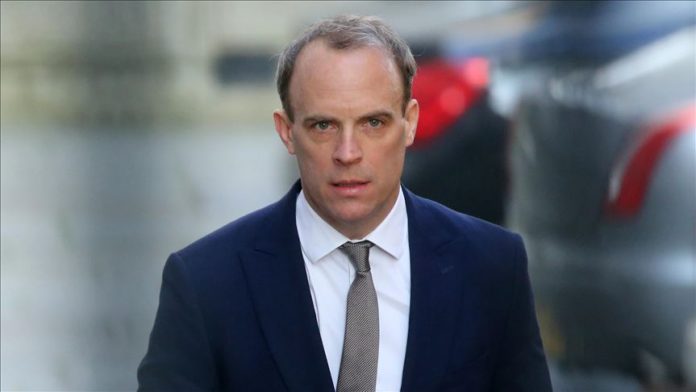 British Foreign Secretary Dominic Raab said the UK has to “trust” the legal safeguards to ensure the proposed takeover of Newcastle United by the Saudis is “done the proper way.”

Speaking on Thursday about the takeover bid by PCP Capital Partners backed by the Saudi Arabian Public Investment Fund and Crown Prince Mohammed bin Salman, the foreign secretary said: “There is a proper process” in the country to look into such takeover bids.

“It’s right that we welcome engagement, investment into football in this country, but legal safeguards must be properly followed to allow the takeover bid to take place,” Raab said, speaking to Sky News.

“There’s a proper process that we’ve got in place to look at everything from the competition aspects to other questions of propriety,” he added.

He said: “I think it’s right that that legal due process, with all its safeguards that it’s got in place, is followed. We have this debate about takeovers in this country, and I think we should follow the rule of law.”

“Everyone’s pleased to see the Premier League back up and running, and also that there are legal safeguards to make sure it’s done the proper way.”

The controversy surrounding the proposed bid has recently thickened with Newcastle United fans pledging to raise issues about the kingdom’s human rights record.

The deal is worth £300 million ($370 million) and will see Riyadh’s Public Investment Fund take an 80% stake in the club.

Local media reported last month sources saying that the “moral, political and legal difficulties” involved in the takeover would likely see a revamp of the owners’ and directors’ test.

The Sun last month reported that at least 10 clubs have expressed concern about the takeover and could band together to force the Premier League board to block it, especially over allegations of Saudi piracy of Premier League matches.

Speaking to Anadolu Agency last month, Cengiz urged the UK government to stop Saudi Crown Prince Mohammed bin Salman to “raise himself above the law of the land” with the proposed takeover.

Khashoggi, a columnist for The Washington Post, was killed and dismembered by a group of Saudi operatives shortly after he entered the country’s consulate in Istanbul on Oct. 2, 2018. Riyadh offered various, conflicting narratives to explain his disappearance before acknowledging he was murdered in the diplomatic building while seeking to shift blame for his death on a botched rendition operation being carried out by rogue agents. Khashoggi’s body has never been found.

Both the UN and Western intelligence agencies believe Prince bin Salman ordered the murder of Khashoggi, who was killed and dismembered in the Saudi Consulate in Istanbul in October 2018, a charge the prince denies.