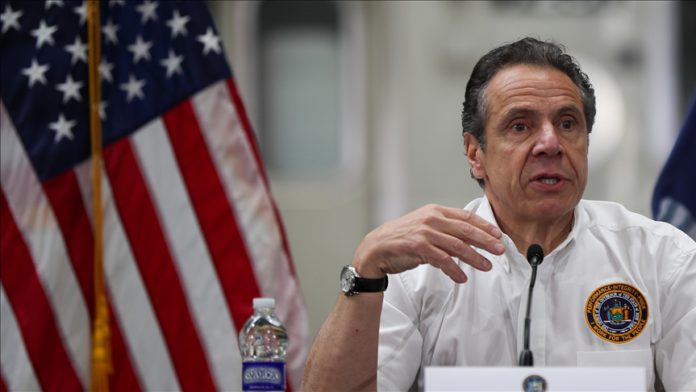 New York Governor Andrew Cuomo declared a gun violence “disaster emergency” Tuesday, characterizing the rise in gun violence in his state as a racist scourge that drags on the economy, beyond the death and injuries it inflicts on its victims.

Cuomo touted that he was the first governor in the US to so broadly label gun violence an “emergency” and treat it with the same seriousness as the COVID crisis, including using science and data to come up with gun violence solutions.

The COVID crisis, he said, was like a low tide that “exposed the ugliness on the bottom” of society, leaving people desperate — and more willing to take up guns.

He mentioned some sobering statistics: shootings have increased 38% in New York City in the last year, and 77% of those shooting victims are people of color. He said that last weekend, while 13 people in New York state died of COVID, 51 people were shot.

He outlined his plans to a cheering audience.

Among them were a “border war,” again using science and data, to keep guns from flowing into New York City from out of state. He said New York has the most restrictive gun laws in the nation but that 74% of guns used in shootings come from outside the state.

He also wants to target the “hot spots” where most shootings are happening and rebuild trust between the public and police.

But Cuomo got some of his loudest applause for his wide-ranging plans to give young, at-risk kids options for jobs that could keep them from turning to violence. He said he wants to break the cycle of “street justice” with intervention programs so that when someone is shot, revenge does not come in the form of more shooting.

And he took a jab at conservative critics who have said that immigrant crime is driving the problem.

Cuomo also talked about the economic impact that gun violence is having on New York City. He said it is easy to see why a New Yorker would be hesitant to come back to live or work in the city with the surge in gun violence.

“Why get on the train or the subway every day? That [attitude] would be devastating for the economy.”

There has been a surge in gun violence across America in 2021, especially in large cities. Chicago recorded over a hundred people wounded in shootings and over a dozen killed just during the three-day July 4th weekend.

And even jaded New Yorkers were stunned by a shooting on a Bronx street caught on video in June. Two innocent bystanders, a 10-year-old girl and her 5-year-old brother, hugged each other in terror as a gunman opened fire on another man next to them. Miraculously, the two were not hurt.

Cuomo added that his state government would invest nearly $140 million in communities to keep them safer.​​​​​​​

A solution to gun violence, he bellowed, “won’t come from this room DOWN, it’ll come from the street UP!”