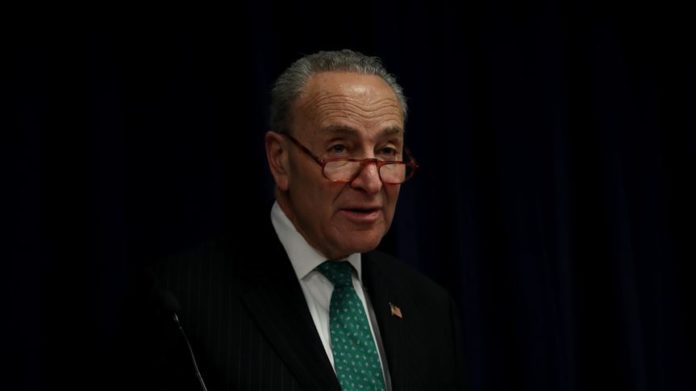 The US Senate minority leader said Wednesday a new stimulus bill to revive the economy against the coronavirus is unlikely to pass since the gap between Democrats and Republicans have become larger.

“There’s so much missing in the bill I wouldn’t call it skinny,” New York Democrat Chuck Schumer told CNN about the bill proposed by Senate Majority Leader Mitch McConnell, a Republican from Kentucky.

“Their old bill, which was about $1 trillion, was skinny. This one is about half that,” Schumer said, noting that the bill does not have money for restaurants, public spaces, travel industry, airlines, broadband internet, hospitals, nursing homes, food for children and people evicted from their homes.

While a vote on the bill could come as early as Thursday, Schumer said if it passes, “There are going to be hundreds of thousands, if not millions, of layoffs of people who work for our state and local governments. People who drive the buses, pick up the garbage and fight the fire, they are not getting any money.”

Democrats demand a much more comprehensive and larger bill worth $3 trillion, which in May passed the Democrat-controlled House of Representatives, but Republicans countered with a $1 trillion bill in July that never came to a vote.

Schumer argued the Democrats’ bill proposed money for unemployment, education and the need of American people.

“Their [Republican] bill meets the needs of a few ideologs who don’t want to vote for anything but they are feeling such pressure from the public that they have to come to the floor,” he said. “Mitch McConnell seems to be the head of the department of cynicism because he knows it won’t pass,” he added.

“Don’t say there’s no hope,” US President Donald Trump said Monday after a reporter suggested that there was weak hope of a deal.

“Why do you say there’s no hope? What do you know? What do you know? And let me just tell you, I know my customers, that’s what I do. I know Pelosi, I know Schumer very well. They don’t wanna make a deal, because they think it’s good for politics if they don’t make a deal. This has nothing to do with anything other than you have to know who you’re dealing with. I do.”

“…And I don’t need to meet with them to be turned down,” he added during a Labor Day press conference.