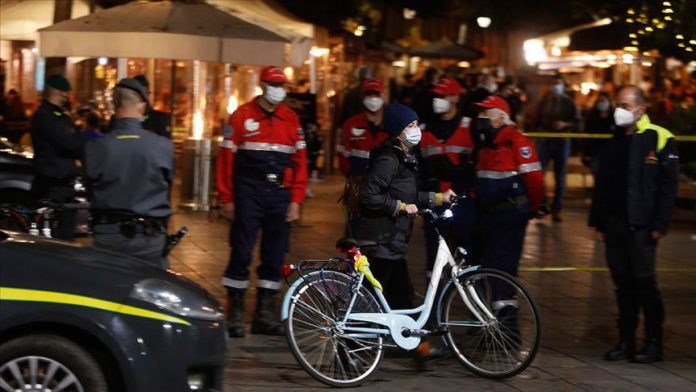 Tensions and protests erupted across Italy on Monday after the government adopted stricter anti-coronavirus rules aimed at stopping the contagion’s rising curve.

The demonstrations, which in a few cases turned violent, especially targeted new rules that impose early closures of business activities, including bars and restaurants, which for a month will have to shut down by 6 pm.

On Sunday night, in the Sicilian city of Catania, paper bombs were thrown in front of the city’s prefecture, after a peaceful protest was infiltrated by hooded demonstrators, local media reported.

In the northern city of Verona, a few dozen protesters gathered in a central square, setting off fireworks and shouting slogans against the government.

Peaceful marches and sit-ins were organized from Turin to Naples by groups of business owners, who complain that the new decree will be devastating and will force many of them to close.

Announcing the new measures on Sunday, Prime Minister Giuseppe said he understood the rising rage and frustration among Italian citizens but stressed that both “health and the economy” must be protected.

He also promised that the worst-hit business categories – including the sports and culture sector – will be compensated with financial aid as soon as November.

The new measures, Conte said, are aimed at averting a new painful lockdown and blocking a spike in new infections that became worrying in the past few days.

On Monday Italy reported just over 17,000 new cases, down from more than 21,000 the day before. But Health Ministry data showed that tens of thousands fewer swab tests were done in the last 24 hours, as often happens during the weekend.

Italy’s total confirmed infections since the start of the pandemic rose to 542,789. The country also reported 141 new deaths in the last 24 hours, bringing the national death toll to 37,479.