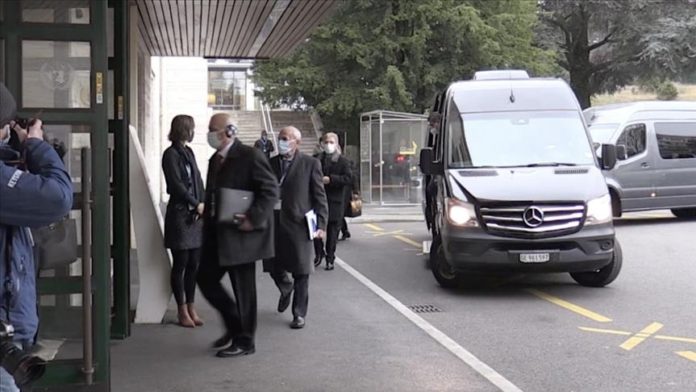 A new round of negotiations aimed at securing peace in Syria began Monday in Geneva with heavy restrictions placed by the UN on access to delegates due to the COVID-19 pandemic.

Delegates from both opposition and the regime filed into the Palais des Nations in Geneva offering no comments, as the United Nations restricted access to journalists citing the COVID-19 pandemic.

She said the meeting was taking place with COVID mitigation in place for the 45 people who usually make up the “small body” of the committee.

In August, similar talks involving representatives of both the Syrian regime had to take a short break as some delegates tested positive for the novel coronavirus.

Many parts of Switzerland face lockdowns due to the hefty number of COVID-19 cases.

On Sunday, UN Special Envoy Geir Pedersen said that the fourth round of intra-Syrian talks could present an opportunity to “focus more heavily” on securing a peaceful political solution to almost a decade of fighting.

“I’m pleased to say that after intense discussions with Swiss authorities, the Swiss health authorities and with the UNOG [United Nations Office at Geneva], and of course with the cooperation of the three delegations, it will now be possible for us to start the meeting.”

Hadi al-Bahra is heading the opposition, while Ahmad Kuzbari is representing the Syrian regime.

“After nearly 10 years of conflict, there is a deep lack of trust between the parties,” said Pedersen.

“We knew that we would have to overcome this deep mistrust. We knew that that would take time. I hope that what we have achieved is actually the beginning of starting to build trust between the parties.”

The special envoy’s office said in a statement: “The Constitutional Committee meets in closed sessions.”