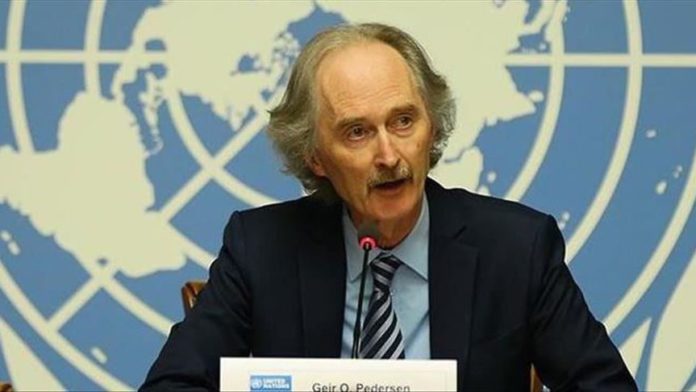 A new round of the stalled Syrian peace talks is set to begin again in Geneva on Aug. 24 under UN Special Envoy for Syria Geir Pedersen, a UN spokeswoman in Geneva said Friday.

Alessandra Vellucci, director at the UN Information Service in Geneva, told journalists at a briefing that depending on air “traffic conditions” and the ability of the delegates to reach Geneva due to the COVID-19 crisis, the talks involving both sides would continue.

“Mr. Pedersen said from the beginning that he wanted to have a physical meeting and that is why the announcement has been made under the condition that the travel situation would not change.”

Switzerland has been easing travel restrictions put in place due to the novel coronavirus.

The last round of talks on Syrian peace failed to start on Nov. 29 due to failure to reach an agreement on the agenda, Pedersen had told journalists in Geneva at the time.

Pedersen briefed the UN Security Council on Thursday about the state of play of the Syrian peace talks.

“That is why guided by resolution 2254, and with the support of the key international players and this Council, I hope that step by step, we can chart a path forwards to end the Syrian people’s suffering and allow them to shape their future,” said Pedersen.

He cited the release of those detained and abducted, a nationwide ceasefire to end violent conflict, and a safe, calm, and neutral environment that enables the safe, voluntary, and dignified return of refugees.

He also said the talks aim at a final political settlement built around a new constitution and inclusive free and fair elections under UN supervision.

“It was not possible to call for a meeting of the small body of 45 because there has not been an agreement on the agenda,” he had said after the talks had stalled last year.

“As you know, in the core rules of procedure, it says that the two co-chairs shall proceed in consensus and agree on an agenda,” said Pedersen, who left without a new date for the next round of talks.

“We tried to reach a compromise … but we are not yet at that point,” said the UN envoy.