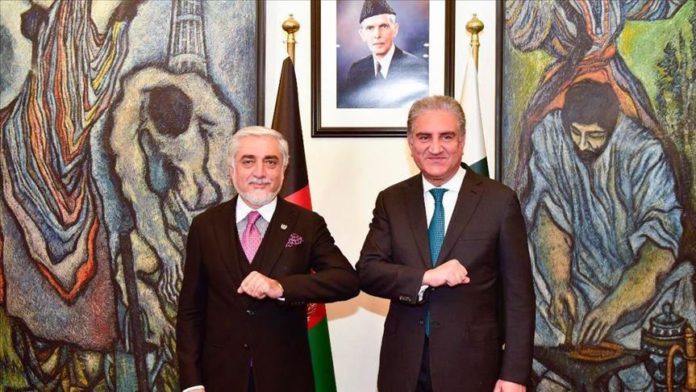 Abdullah Abdullah, the man leading Afghanistan’s peace process, thanked Pakistan for efforts to forge a “new path” with its war-weary neighbor as he concluded a three-day visit to Islamabad late on Wednesday.

Abdullah, the head of Afghanistan’s High Council for National Reconciliation, arrived in Pakistan on Monday amid the ongoing intra-Afghan dialogue, which began in Qatar’s capital Doha earlier this month.

In a tweet, he thanked Pakistan’s civilian and military leaders, as well as the “PAK nation & civil society for their warm welcome, hospitality & a new path.”

The Afghan politician was seen off on Wednesday night by Abdul Razak Dawood, the Pakistani premier’s commerce adviser, and Muhammad Sadiq, Islamabad’s special representative for Afghanistan.

Abdullah’s visit is seen as a significant step forward in Kabul and Islamabad’s efforts to bridge divides and advance Pak-Afghan cooperation, particularly regarding the peace push.

In his address at the ISS event, Abdullah said the two neighbors “are on the threshold of a new era in bilateral relations based on mutual respect and sincere cooperation for shared prosperity.”

“I am a firm believer that after many troubling years, we now need to go beyond the usual stale rhetoric and shadowy conspiracy theories that have held us back,” Abdullah said.

“We cannot afford to pursue business as usual. We need fresh approaches and our people demand it from us. It is more urgent than ever to look to our region as one region.”

Prime Minister Khan also struck a similar note in his meeting with Abdullah, reiterating Pakistan’s support for efforts to end the nearly two-decades-long conflict in Afghanistan.

According to a statement from his office, Khan assured Abdullah that Islamabad will “support whatever the Afghans agree upon about the future of Afghanistan” and offer all possible help “on its path to reconstruction and economic development.”

He expressed the hope that Abdullah’s visit will help open a new chapter in Kabul and Islamabad’s often troubled relationship, adding that he will be visiting Afghanistan soon on President Ashraf Ghani’s invitation.

“We had a very interesting conversation: theme being the Past is an invaluable teacher to learn from but not to live in. We must look forward towards the future. I wish him all the success in his mission,” Khan said in a tweet on Wednesday.

Pakistan’s Foreign Minister Qureshi also expressed similar sentiments, stressing that the “Afghan peace process is of paramount importance for both Pakistan and Afghanistan & its success ensures socio-economic prosperity for all.”

Abdullah’s visit “further strengthens the amity & fraternity between our countries,” he added.

In December 2018, Islamabad arranged rare direct talks between Washington and the Taliban, which led to a peace deal this February.

Under the agreement, the US committed to withdrawal of all foreign forces from Afghanistan by July 2021.

In return, the Taliban pledged to prevent terrorist groups from using Afghan soil for attacks, and promised to seek reconciliation with other Afghan groups through a dialogue process.

Islamabad also facilitated and hosted the landmark first round of direct talks between the Afghan government and the Taliban in July 2015.

It was further hampered by the killing of Omar’s successor, Mullah Akhtar Mansoor, in a US drone strike on the Pakistan-Afghanistan border in 2016.