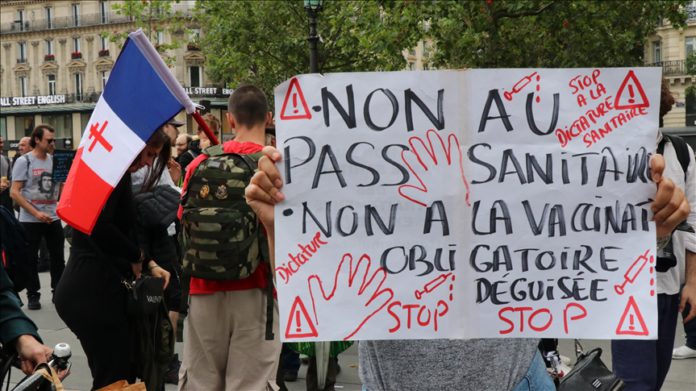 Demonstrators in France on Wednesday protested the announcement of mandatory vaccinations for health workers and the implementation of a health pass restricting access to public places for the unvaccinated.

The new restrictions announced by President Emmanuel Macron earlier this week have divided the French, with large demonstrations taking place in Paris, Nantes, Annecy, Montpellier, Strasbourg, Perpignan and other cities.

Demonstrators carried signs that read “No to vaccine,” “No to health pass,” “Freedom” and “Health dictatorship” in response to the measures which will be enforced beginning July 21 amid a surge of Delta variant coronavirus cases and an advancing fourth wave of the pandemic.

Protests come at a time when several developing and poor countries in Asia, Africa, Latin America and the Middle East are suffering from a lack of vaccines.

The French will be required to download a government-approved health pass app or carry printouts proving vaccination or negative results of PCR/Antigen tests conducted less than 48 hours to enter cultural and leisure venues.

Likewise, vaccination has been made mandatory for health care workers employed in nursing and non-nursing jobs in all medical institutions.

Those who do not avail themselves of the shots will be sanctioned and may lose employment or salaries, the government announced.

A bill pronouncing the new health restrictions will be tabled in parliament for approval by elected representatives in the coming weeks.

Hours after Macron’s announcement, authorities registered a surge with more than 900,000 people rushing to book an appointment for the first vaccine dose.

On Tuesday, a record 792,339 received the vaccination. Nearly 36 million people have received at least one shot of the vaccine.

But the latest demonstrations show anger and resistance amongst anti-vaxxers toward rules to achieve herd immunity.

Health Minister Olivier Veran tried to stress the need for immunization in a tweet.

“In 30 large hospitals, 100% of patients recently admitted to intensive care are unvaccinated,” he said.

As per the latest health data, there were 8,875 new cases of the virus and six deaths.