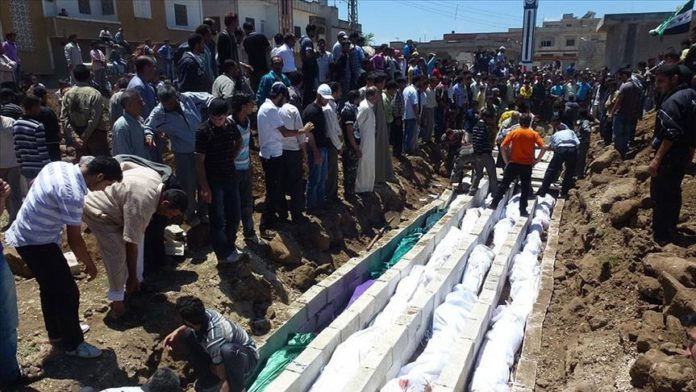 The Syrian Opposition Coalition (SOC) unveiled new documents on Saturday, proving the Assad regime’s involvement in war crimes against civilians in a hospital in the city of Homs.

Speaking at a news conference in Istanbul, Nasr al-Hariri, the president of the National Coalition of Syrian Revolutionary and Opposition Forces, shared documents that prove the regime’s involvement in the mass murder of 5,210 people in Abdul Qader Al-Shaqfa Hospital in the al-Waer district of the central Homs city.

He noted that the person who leaked the documents from the hospital currently lives in the liberated areas and that the documents are official and were issued by the Assad regime as they carry stamps of the forensic medicine, hospital administration, and regime’s security services.

Al-Hariri stressed that the SOC will work with the UN, EU, US, UK, UN’s Human Rights Council, and other international organizations to establish effective mechanisms for holding the Assad regime accountable for these crimes.

In its 10th report, released in 2013, the Independent International Commission of Inquiry on the Syrian Arab Republic said the Assad regime used Abdul Qader Al-Shaqfa Hospital as a military base to suppress protests.

Syria has been ravaged by a civil war since early 2011, when the Bashar al-Assad regime cracked down on pro-democracy protesters with unexpected ferocity.