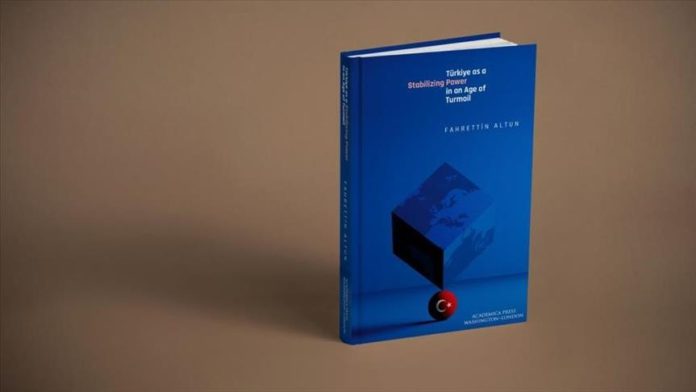 Turkiye’s role in the global world order is the focus in a new book authored by the country’s Communications Director Fahrettin Altun.

Turkiye as a Stabilizing Power in an Age of Turmoil offers “a concise yet detailed analysis of Turkiye’s foreign policy within the context of civil wars, humanitarian tragedies, and the structural changes taking place in Turkiye’s neighborhood.”

The book has been published in English by Academica Press, which is based in London and Washington, DC.

Setting out President Recep Tayyip Erdogan’s basic parameters of foreign policy, it analyzes Turkiye’s role in the global system over the past two decades and the challenges it has faced.

Altun emphasizes the need for a new approach as he criticizes the existing global system and institutions for their failure to deal with “pressing problems, emerging challenges, and regional and international conflicts.”

Amid an unraveling global order, deepening humanitarian crises and rising violence, Turkiye, the book explains, has persistently advocated the importance of international cooperation and “adopted a more proactive foreign policy with an eye toward ending long-standing international disputes while avoiding the trap of unilateralism.”

Altun also provides “valuable insights into Turkiye’s perspectives on the situation in Cyprus, the Syrian civil war, the future of Iraq, Iran’s nuclear ambitions, the Arab Spring, and the Libyan conflict.”

Turkiye’s communications director has concluded his latest offering by laying out the reasons for the country’s push for reforms to international organizations such as the United Nations and NATO.

Altun has also shed light on the ways in which Turkiye has responded to growing new challenges, including the rise of populism, far-right extremism and Islamophobia.​​​​​​​

China: US claims on Houston consulate 'not factual'