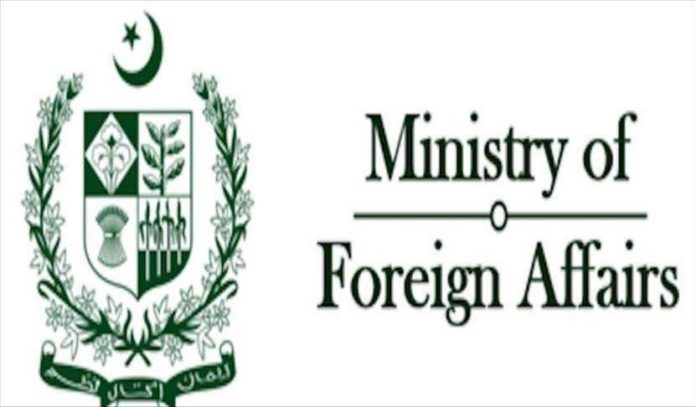 Pakistan on Friday said it has “never shied away from talks” with India, but there can be no progress until New Delhi creates a “conducive environment for meaningful dialogue.”

“Pakistan has never shied away from talks and has always underscored the need for a meaningful dialogue and peaceful resolution of all outstanding issues with India, including the core issue of Jammu and Kashmir,” Foreign Ministry spokesman Zahid Hafeez Chaudhri said at a news briefing in the capital.

“We believe that durable peace, security, and development in the region hinge on peaceful resolution of the long-standing Jammu and Kashmir dispute.”

He stressed that Islamabad has repeatedly conveyed that it wants stability in the region and there has been no change in its stance.

“Our desire for regional peace has been clearly spelled out by Prime Minister Imran Khan on a number of occasions, who has stated that if India takes one step toward peace, Pakistan will take two,” the official said.

“However, [the] onus is on India to create a conducive environment for a meaningful and result-oriented dialogue.”

The spokesman said Pakistan believes that the international community “has an important role to play in averting risks to peace and stability in the region and facilitating a just and lasting solution to the Jammu and Kashmir dispute.”

He added that Islamabad is actively putting more focus on geo-economics rather than geopolitics.

“While fully resolved to protect Pakistan’s national security interests, our emphasis is shifting from geopolitics to geo-economics,” the official said.

“The concept of national security is also undergoing a review to with economic security being central.”

Chaudhri’s remarks came a day after Prime Minister Khan’s government backtracked on a decision to allow imports of cotton and sugar from India.

Foreign Minister Shah Mehmood Qureshi said the move — which would have ended nearly two years of trade suspension between the nuclear-armed neighbors — was “put off as it needs further deliberation.”

“It was a consensus opinion that normalizing relations with India is not possible until it reviews its August 2019 unilateral decision on Kashmir,” he said after a Cabinet meeting on Thursday.

The trade decision was widely viewed as another sign of apparently easing tensions, after the South Asian rivals agreed in February to honor a 2003 deal for a cease-fire along the Line of Control – a de facto border that divides the picturesque Himalayan region between the two countries.

Kashmir is held by India and Pakistan in parts and claimed both in full. China also holds a small sliver of the disputed region.

Some Kashmiri groups in Jammu and Kashmir have been fighting against Indian rule for independence or unification with Pakistan.

Relations between Pakistan and India plummeted to a new low after India scrapped the special status of Jammu and Kashmir in August 2019.