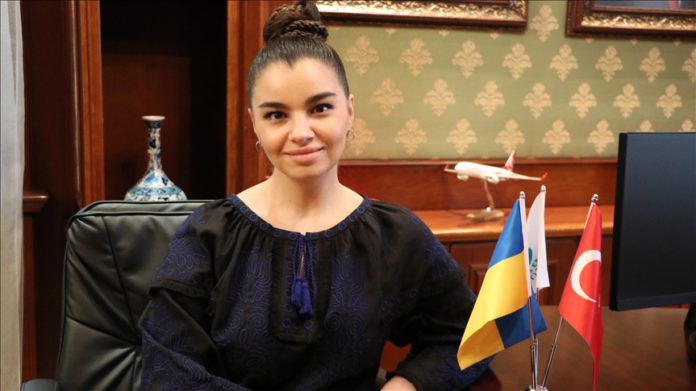 The winner of the Turkvision Song Contest, held online this year due to the COVID-19 pandemic restrictions, urged everyone to never give up on their dreams and go till the end to achieve them.

“My eyes saw the result but my brain couldn’t believe it. A Ukrainian Gagauz Turk won the contest, I was crying and happy, I was very touched. My advice to everyone is never leave your dreams, go till the end,” Natalia Papazoglu, a Gagauz Turk from Ukraine, told Anadolu Agency.

In the online song contest held Sunday and aired on the TMB TV channel in Istanbul, Papazoglu won first place among the participants from 26 countries with 226 points.

Emphasizing that the contest was postponed due to the Armenia-Azerbaijan conflict over Nagorno-Karabakh, Papazoglu said: “We were informed one week before the contest and we got prepared within a week. If we had more time, a better piece could have come out.”

She said that if the pandemic restrictions would end next year, she would like to participate again in the contest scheduled to be held in the city of Shusha in Azerbaijan’s Nagorno-Karabakh territory recently liberated from the nearly three-decade occupation of Armenian forces.

Saying that the contest has united all Turkic people, Papazoglu added: “If you do not have a past, you cannot have a future. It is important to know your roots.”

She also said that she fell in love with Turkey, and Istanbul in particular.

“My city favorite in Turkey is Istanbul. It’s a very colorful city, big and small at the same time, it is historical and cultural, yet young and modern. For me, Istanbul represents the place where tradition meets the future.”