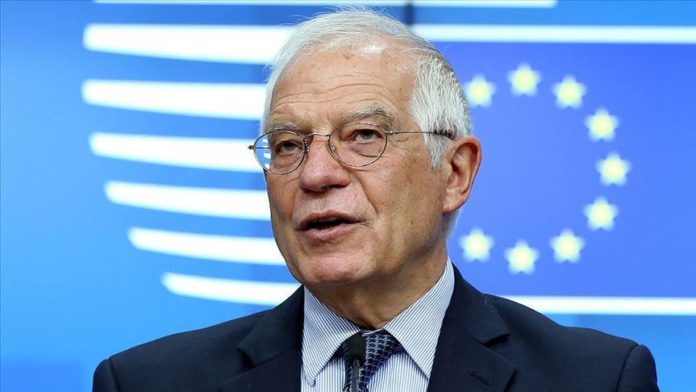 Speaking at a European Parliament session called by the conservative European People’s Party, Borrell said: “Turkey is an important partner, candidate country, and a NATO ally. The current negative trend in our relations needs to be stopped and reversed.”

Borrell said he recently visited Turkey after visiting Greece and the Greek Cypriot administration, adding that “stability and security in the Mediterranean requires collective engagement.”

Conflicts in Syria and Libya directly affecting the security and interests of EU in terms of terrorism, migration, and political stability in the region, he added.

Borrell said Turkey and EU have had some important disagreements over Syria, as EU members opposed Turkey’s anti-terror operation Peace Spring in October 2019.

“Yet we must also knowledge where our interest coincide [with Turkey]. Turkey has been showing solidarity and generosity towards more than 3.5 million Syrian refugees, and has supplied cross border and humanitarian assistance,” he stressed.

“In the eastern Mediterranean Turkey has been showing a warden assertiveness,”Borrell said, adding they are ready to work with Ankara for a political solution in Libya.

The high representative also stated that they are committed to implement UN arms embargo to Libya.

“Dynamics of retaliation does not make the Mediterranean a more secure and stable zone. This will only be achieved through dialogue and negotiations where discrepancies exist,” he also said.

For his part, Nacho Sanchez Amor, the EU Parliament’s Turkey rapporteur, said Turkey-EU relations have been through a difficult period.

He said there is a lack of trust that affects the basis of bilateral relations, adding that EU member states should stand with Greece and the Greek Cypriot administration.

Manfred Weber, chairman of the European People’s Party, said they have called the session to raise their concerns about recent developments in the Mediterranean.

He said, problems between Turkey, Greece and the Greek Cypriot administration are not only affecting these countries but the whole European Union.

Weber argued that it is wrong to continue membership talks with Turkey under these conditions.

* Writing and contribution by Busra Nur Bilgic Cakmak in Ankara.