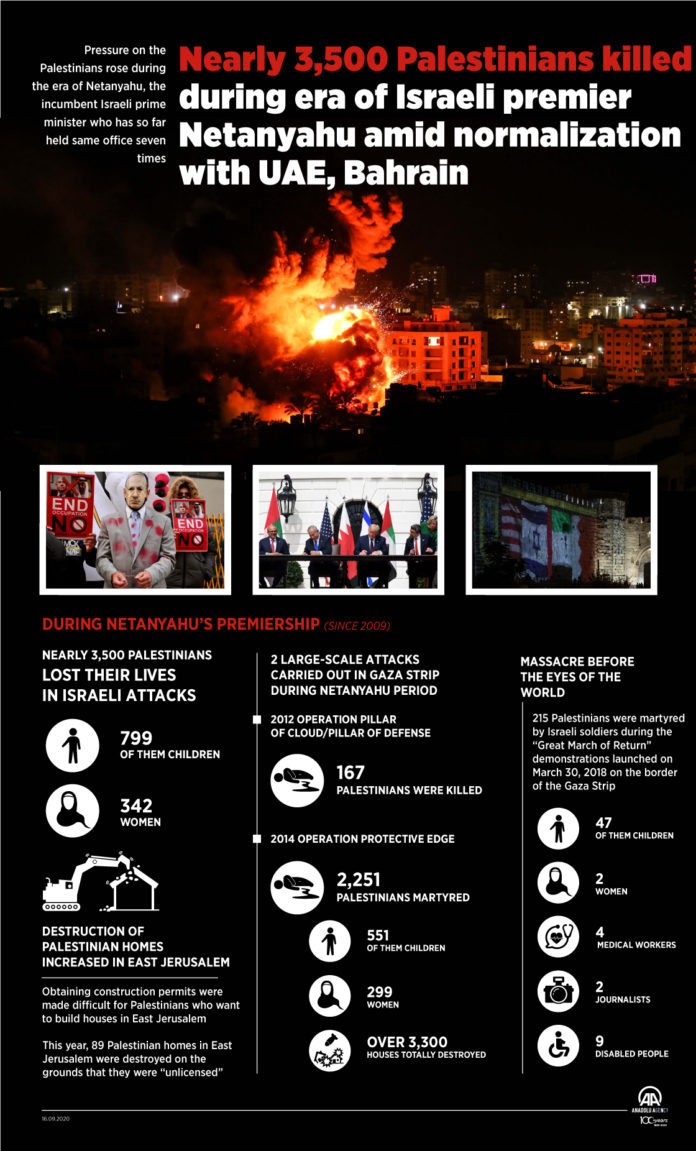 During the prime ministry of Benjamin Netanyahu, who signed an agreement with the UAE and Bahrain to normalize relations, nearly 3,500 Palestinians, including many women and children, were martyred and thousands of others injured in the attacks of Israeli forces.

Netanyahu, shown as one of the chief architects of Israel’s oppression and violations against Palestine, served as the prime minister during the two bloody attacks on the Gaza Strip under the blockade by the Israeli army.

According to the data of the Israeli rights group B’Tselem, nearly 3,500 Palestinian Palestinians have been martyred in the attacks of the Israeli forces in the occupied West Bank and besieged Gaza since 2009, when Netanyahu was the prime minister.

Of the Palestinians who lost their lives in Israeli attacks, 799 were children, and 342 women.

Netanyahu, who took the prime ministry seat seven times, ordered the “Operation Pillar of Cloud” in 2012 and “Operation Protective Edge” attacks in 2014 against the Gaza Strip.

According to data from B’Tselem, 167 Palestinians lost their lives in Israel’s 2012 attacks on Gaza.

The year of 2014 was one of the bloodiest years in Palestinian history due to the attacks Israel launched on Gaza on July 8, under Netanyahu.

According to a UN report, the Israeli army hit Gaza with 6,000 airstrikes with nearly 50,000 tank and artillery shells for 50 days.

Palestinian authorities noted that 28,366 houses were damaged in the city, devastated especially by airstrikes, leaving 3,329 houses completely and 23,445 partially destroyed.

Some 65,000 Palestinians were left homeless in Gaza, where infrastructure was badly damaged due to the attacks.

Massacre before eyes of the world

Under the prime ministry of Netanyahu, who ordered the 2012 and 2014 attacks — shown among the bloodiest attacks on Gaza — Israeli forces carried out a new massacre in the region in 2018.

During the peaceful demonstrations under the name of the “Great March of Return” launched on the Gaza border on March 30, 2018 and lasted for months, Israeli soldiers did not refrain from using excessive force, including real bullets, against the Palestinians.

The Netanyahu administration could not tolerate even the peaceful demonstrations held at the border demanding the right to return of Palestinian refugees who were forcibly expelled from their lands after the lifting of the land, air, and sea blockade of the Gaza Strip since 2006.

Israeli soldiers massacred Palestinians in front of the eyes of the world during the protests, aired by live broadcasts of local TV channels.

According to the data of Al Mezan, a human rights organization in Gaza, 215 Palestinians were martyred by Israeli soldiers and thousands injured in the demonstrations.

Among those who lost their lives in Israel’s attacks on the Gaza border were 47 children, two women, four healthcare workers, two journalists, and nine disabled people.

During the Netanyahu period, the pressure on the Palestinians increased, along with the massacres.

Especially in the occupied East Jerusalem, the Israeli administration does not allow the Palestinians to build houses and continues to destroy some with the claim that they were built without permission.

According to B’Tselem, while Israel destroyed 30 Palestinian homes in East Jerusalem this year on the grounds that they are “unlicensed”, 59 families had to destroy their homes on their own due to Israeli decision. With these destructions, 278 people were left homeless, including 141 children.

As the Israeli administration also takes the destruction costs from the owners of these houses, Palestinians have to demolish their own homes.

According to the report, 23 Palestinian homes were destroyed in East Jerusalem in 2010. This reveals the recent rise in the destruction in the area.