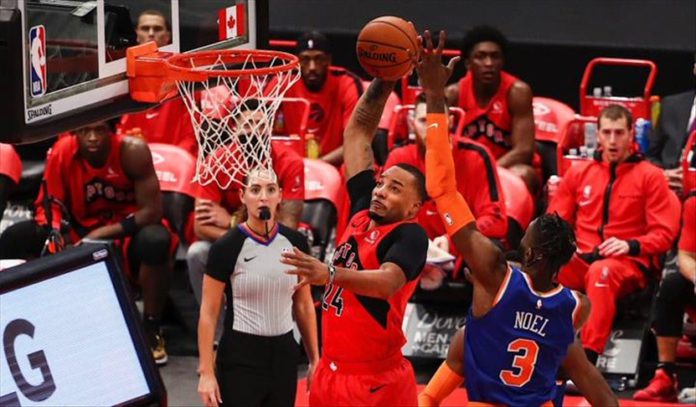 The Toronto Raptors notched their first victory of the season, beating the New York Knicks 100-83 on Thursday night.

Playing at Amalie Arena, Fred VanVleet became the highest scorer of the game with 25 points, seven assists and five rebounds.

Kyle Lowry was also on fire with 20 points and seven rebounds, while three more players scored in double figures for the Raptors.

For the Knicks, Julius Randle performed a double-double with 16 points and 10 rebounds. Rookie forward Kevin Knox came off the bench to add 16 points and 6 rebounds.

Joel Embiid and Seth Curry brought victory to the 76ers, playing with 21 points each at Orlando’s Amway Center.

Tobias Harris also helped his team with 20 points and nine rebounds in an away win.

The Magic’s Montenegrin center Nikola Vucevic made a double-double with 19 points and 10 rebounds.

Cole Anthony scored 16 points and seven rebounds but his performance could not avoid the loss to the Sixers.

The Houston Rockets defeated the Sacramento Kings 122-119 at Toyota Center.

The winning side’s James Harden was the highest scorer of the game with 33 points, eight assists and six rebounds.

Following this win, the Rockets had 1-2 win/loss.