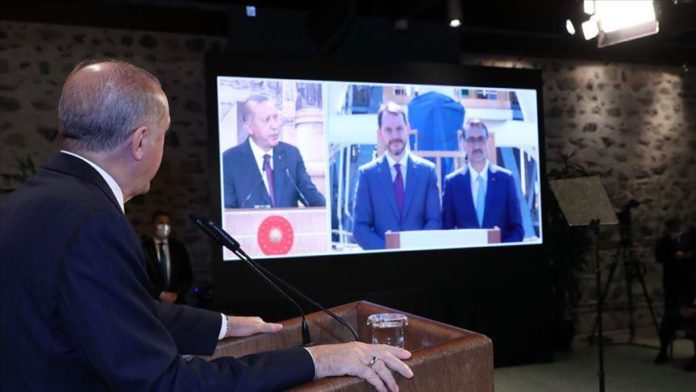 “With the current exploration and potential here, I hope in the coming days we will talk about a current account surplus,” said Berat Albayrak, speaking alongside Energy and Natural Resources Minister Fatih Donmez on the Turkish drill ship Fatih off the Black Sea province of Zonguldak.

The discovery of significant gas resources in the Black Sea could reduce Turkey’s reliance on energy imports, he added.

Some 320 billion cubic meters of natural gas reserves were found after the drill ship Fatih started work on July 20 off the Black Sea coast, as announced Friday by President Recep Tayyip Erdogan.

The size of the discovery dwarfs all the natural gas Turkey has ever produced – 16.6 billion cubic meters – by twenty-fold.

The Fatih has been exploring at the Tuna-1 well, where the find was made, some 100 nautical miles (185 kilometers) north of the Turkish coast in the western Black Sea.

Erdogan said the natural gas discovery is the biggest in Turkey’s history.

In addition to changing Turkey’s trade balances, the find could also trigger changes in its gas contracts with Russia, Iran, and Azerbaijan.