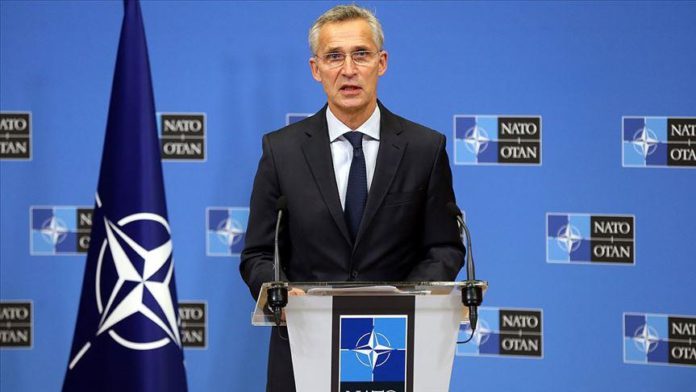 NATO is committed to further strengthen the deconfliction mechanism between Turkey and Greece to ease tensions in the Eastern Mediterranean, Secretary-General Jens Stoltenberg said Tuesday.

Noting that the 30-member alliance helped establish a hotline between the two countries, he said: “I’m committed to strengthening this mechanism further to build more comprehensive confidence building measures.”

NATO is ready to reduce the tension, he said, adding that they support German-led initiatives to solve the crisis.

Relations have been icy as Athens has opposed Ankara sending its drill ships into the Eastern Mediterranean for energy exploration.

Stoltenberg was speaking at a news conference in Brussels after the first day of a NATO defense ministers meeting, where member states discussed several issues, including the NATO 2030 project, Russia’s military buildup, the rise of China and NATO’s mission in Afghanistan.

Speaking on the ongoing Afghan peace process and the US’ decision to withdraw troops, he said: “Ministers made clear that all allies remain committed to the mission and to supporting Afghan security forces in the fight against terrorism.”

He said that NATO faces a dilemma whether to stay in or leave Afghanistan.

“If we stay, we risk continued fighting an even longer-term engagement. If we leave, we risk Afghanistan, once again, becoming a safe haven for international terrorists […] there is a price for staying longer, but there’s also a price for leaving too soon.”

The NATO chief said he expects a final decision in this regard in February.

His statement comes as peace talks between Kabul and the Taliban to chalk out a political roadmap of post-war Afghanistan are underway in Doha, Qatar.

Under a deal signed with the insurgents this February, the US committed to withdraw all foreign forces from Afghanistan by July 2021.

Donald Trump, who lost the Nov. 3 election to Joe Biden, has announced that US troop levels in Afghanistan will be reduced to 2,500 before Jan. 20, when he leaves the White House.

NATO currently has fewer than 12,000 troops from different nations in Afghanistan, with around 4,500 of them being American soldiers.